French say 60% of National Debt is Illegal – Default Anyone?

I have been warning that there will be no solution without a massive debt default. This is simply the way it has historically always gone down. Public debt, which is strangely considered quality, has been actually the worst that can possibly exist. Simply stated, no government has ever paid its debt except the single exception of Romania and that produced MASSIVE deflation.

The French have put out a study and are suggesting that this may be the solution. In a 30 page report, they are now saying that 60% of the national debt is illegal. Once you declare it is illegal, then the fools who bought it are at fault.

You can go to EBay and buy countless bonds from all sort of countries that went bust. The real crisis that we face this time, centers around the problem of pensions. The pension fund managers have traditionally held at least 40% of their portfolios in government bonds. This is the massive deflation bomb on the horizon. Just how is this going to be resolved? In the case of Rome, the economy imploded and eventually went into a Dark Age. 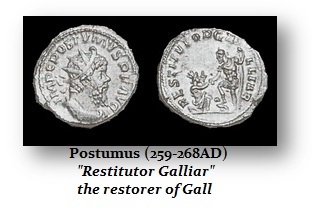 During the 3rd century, Rome broke apart into three empires. Here is a coin issued by Postumus – a Roman general who led a rebellion and France, Britain, and Spain broke away from Rome. It was known as the Gallic Empire. This coin declares that he is the restorer of order and normalcy that was absent in Rome. Just replace the word Rome with Washington DC and you will see that history does repeat. 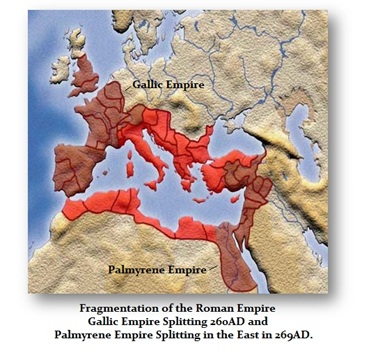 It was debt and unfunded liability that led to the massive collapse of the Roman Empire. Nothing has changed. We are setting the stage for a repeat of history as separatist movements are rising everywhere along with taxes.