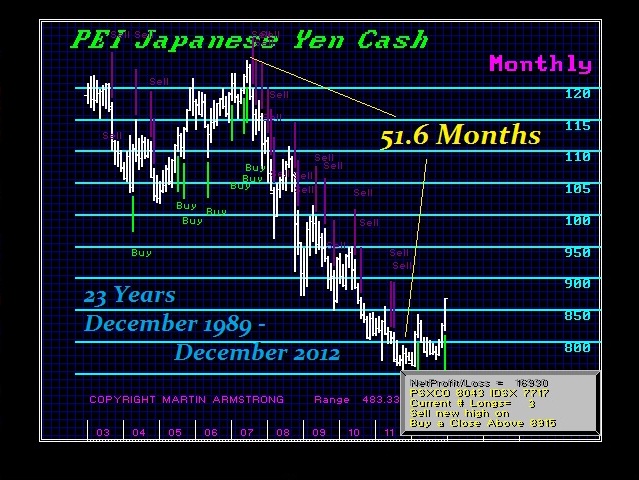 Quite a few readers have asked:

“You must be advising Japan again. China is too obvious. You say don’t buy bonds from NY and 2 weeks later they stop. Looks like Japan is following you again.”

We just cannot comment on who is a client or not. As for the trend, yes. The dollar bottomed precisely against the yen after 51.6 months. On the 23 year target two Monthly Bullish Reversals were elected in December. The breakout was right on schedule – 23 years to the month (12/1989 to 12/2012).

Yes, the Japanese government is now talking up the markets and they will publicly be given the credit for the turn. The wind has changed so they are no longer “pissing in the wind” so to speak. There is a lot more going on behind the scenes.

The Dollar Bears just do not get it. There is a lot more to the rise and fall of currency than simply the supply. It is called CONFIDENCE that drives DEMAND. Those touting the collapse of the dollar solely because the Fed increased the supply are looking at only one side of a coin. There is always the flip side.

CONFIDENCE manifests in many ways and one is the “flight to quality” meaning you must choose between the lessor of two evils. Japan is totally ALONE! The USA can beat its chest and make noises. It is completely impotent against China or Russia and North Korea for that matter. The USA is so debt burdened that it cannot wage war. It will not invade Iran because Russia will get involved so it uses sanctions. The same is true with North Korea. The USA has been disarmed by the bankers.

Yet at the same time, the USA has nuks and that means China or Russia would also not dare attack. Thus, the dollar is STILL the safe haven both from Europe that is living the Marxist Nightmare being held together with a string, bubble gum, and hope, in contrast to Japan where both Russia and China feel it is pay-back time. Capital in Japan is on the move for the first time because they are also seeing the same problem – they are ALONE and have no national security.

Against this backdrop, you really think the dollar can crash and burn simply because the supply increases? For that to happen there has to be an alternative. Where? Don’t say gold – that is purely a hedge for individuals. It produces no ongoing yield unless you rent it out then the Goldbugs say you are suppressing gold. So institutional money cannot go there in size. The best they can do is go to STOCKS – the shift from PUBLIC to PRIVATE where they can earn dividends. 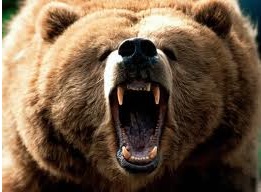 So for the dollar bears who only look at supply, remember this. The majority is ALWAYS wrong for they are the fuel that generates the counter-move. Welcome to markets – 101.

At the Princeton Conference March 18-19th, we will go over how to use the model, as well as trading techniques How to Trade a Panic in detail. It is clearly time to prove these skills.

« Resignation of the Pope – Was it On Time?
Disarming America »