Does Money Have to be Backed?

Question: I just don’t see how intangible money with no backing of any sort can survive for any length of time.

This idea that money has to be TANGIBLE is amazing. Money has always been whatever society agrees on. In Asia, money was ALWAYS simply INTANGIBLE since 246BC. China did NOT issue gold or silver coins and money was worth whatever the emperor (son of God on earth) said it was worth. These stories spun by goldbugs who keep insisting money has to be only TANGIBLE has absolutely no basis in fact or history.

Even before gold and silver became COMMON enough to be used in trade since it was previously only allowed to be possessed by kings, money in Egypt was no different than paper money for almost 3,000 years. Farmers deposited grain in state warehouses and those receipts traded as money just as paper money does today. Egypt produced coins ONLY after it was conquered by Alexander the Great in 334BC. Money had first been CATTLE and then BRONZE because the first was food and the second had a utility value and could be used for plows or swords. Gold and silver were desirable but never had any utility value. The Latin word for cattle was “PECUS” from which emerged the word for MONEY that became “PECUNIA.” At first glance you may not see how we still use this word and concept of cattle today. When someone has a financial interest in something, he is said to have a “PECUNIARY” interest. Cattle thus were the valuable object that served as the MEDIUM OF EXCHANGE and the UNIT OF ACCOUNT. This is why the Romans displayed cattle on the earliest bronze ingots – Aes Signatum. 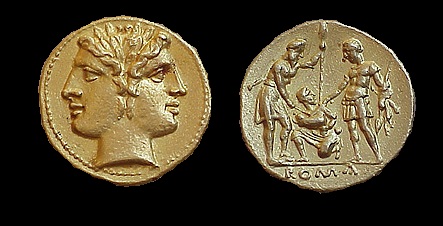 Explain how Rome existed without gold or silver coinage for the first 500 years. They began issuing gold coinage as shown here in 225BC after the Punic Wars. How did Japan exist with no coinage at all for 600 years?

Explain how gold vanished from circulation in Europe after the fall or Rome between about 600AD until the mid 13th Century. how could society possibly function without TANGIBLE money or some currency BACKED by precious metal. Gold is a desirable object. Its value is like everything else, based solely upon what someone else says it is worth. 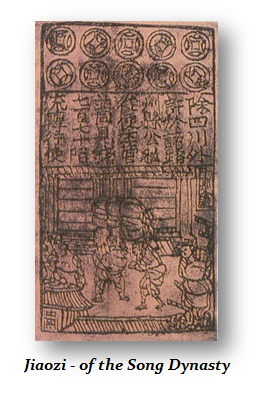 Paper currency in first emerged in Egypt as warehouse receipts. Banks in Europe emerged by the same process always pretending the receipt represented money. Any receipt that could be exchanged on a bearer basis was money. So the question about money with no backing cannot last is just gibberish and is unsupported by history. Even the Chinese actually invented “paper money” instead of clay tablet receipts.

So claiming money MUST be backed is absurd, unsupported by fact, and if that is the pretense, then please explain why Bretton Woods collapse in 1971 when money was clearly backed. Obviously, that is not the solution unless you are to be brain washed in which case you will probably get 73 virgins with coupon payments in gold, the leprechaun will be there with the pot of gold to bring you good luck, and Santa Claus will give you a ride in his flying slay.

Until we review history and accept that money is simply a medium of exchange and NOT a store of value, we will never advance as a society forever capture by our own ignorance, taxed and pursued to the ends of the earth, stripped naked of all our rights, liberties, and privileges. It is that very thinking that is tearing the world apart. The Physiocrats argued money was agriculture and that set in motion the idea of empire building. What we think is money dictates our actions. That is why Adam Smith explained the Wealth of Nations lies in its total productive capacity. Japan rose to the 2nd largest economy postwar not on gold, but on its productive capacity just as China is now displacing the USA.

There exists 6000 years of data that proves precisely what money is and we keep ranting and raving like some medieval doctor who swears all illness is in the blood so we have to bleed ourselves to get better. The world is no more flat than money is some tangible fixed entity that is a store of value. That is MARXISM because you are trying to fix money and therefore eliminate the booms and busts where money rises and falls in value. This is pure insanity UNSUPPORTED by history.

Gold can be a personal HEDGE against government and MONEY, but it cannot be FIXED as money nor can you eliminate the business cycle which will ALWAYS tear apart any such system – look at the Euro right now. Gold rose and fell during the 19th century when it was money. So anyone who thinks money MUST BE BACKED please explain what that is supposed to accomplish. A flat line? Money can never be fixed if it is bronze, cattle, cowrie shells or slave-girls as was the unit of value in Ireland as St Patrick reported. It is simply a medium of exchange and EVERYTHING fluctuates in value – nothing remains fixed forever.