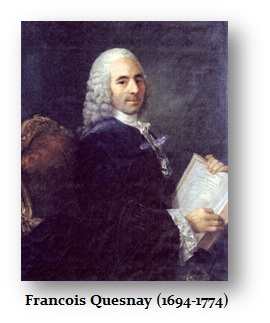 Franqois Quesnay was a French economist. Educated as a surgeon in Paris. Court physician to Louis XV in 1752. Quesnay is principally remembered for his book Tableau Economique (1758). The vision and imagination of this work made him by far the most outstanding Physiocrat. In the book, Quesnay divides society into three groups: agricultural workers, proprietors, and the ‘sterile manufacturing sector.’ The Physiocrats believed that nature was the source of all wealth and that agricultural workers provided society’s means (if receiving the surplus, or ‘produit net’ given up by nature. Tableau Economique sets out to show how the ‘produit net’ was distributed among the various classes of society and was the first attempt to look at the workings of the economy as a whole. Its broad approach is similar in some respects to input-output analysis.