Depression Never Ends At the Same Time For Everyone

A few months ago you wrote:

Greek Depression Will Not End until 2020

I have explained the Golden Rule of Corrections. Once you extend in anything beyond a time unit of 3, you are then in a change in trend. The Greek recession, and most of the Western World, began in 2007. We began with the Greek Debt Crisis precisely to the day on the Pi Target from the 2007.15 high in the Economic Confidence Model. That was the 3 year mark and signaled we were beginning a serious major change in long-term trend.That means at the very least, we are looking at the first possible low being 2017 but it is more likely we will extend into a 13 year decline if the pressure is extreme pushing the low into 2020.

… Can you elaborate please when you think the global depression (Europe,USA) began ,where is the mid-cycle,and where is the end? My opinion is that it will correspond with the commodity cycle and the world depression will last till 2032.

ANSWER: A very important book is being finish right now that is part of my goal to try to get out what I have learned from running around the world with my front row seat as Milton Friedman use to tell me. Each nation entered the Great Depression and exited it at different times and this is tracked in the forthcoming book two people are editing now.

Greece will most likely exit this Depressionary cycle in 2020. I do not think that they government will endure if they were to follow the austerity measures. The risk for Greece is will it be allowed to exit the Euro. Yes, Brussels is actually a strong-arm organization that is unlikely to accept withdrawal lightly. They deliberately intervened to manipulate the Italian elections to prevent their exit from the Euro. They threatened the Greek government that wanted to put the bailout to election that there would be no bailout deal if they allowed the people to vote. 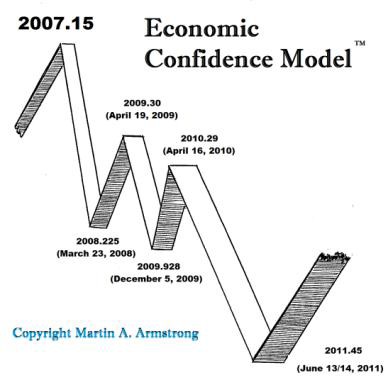 The entire Greek Debt Crisis erupted as we approached the π (Pi) Turning Point  on  the Economic  Confidence Model  2010.29  (April  16th, 2010). Had it NOT been for the free market there would be NO check and balance.

The free market was correct from the outset for pictured here is the Greek Drachma per Euro on a weekly basis for 1999 and 2000. This shows how the Drachma fell from nearly 320 to 340.75 to the Euro in anticipation of future problems.

In the case of Greece, even if we start at 1999, the turning point for a Depression would be 23 to 26 years max. This would bring us to 2022 or 2025. Any way we look at this, Greece should be the FIRST to exit and for that reason it warrants close observation. 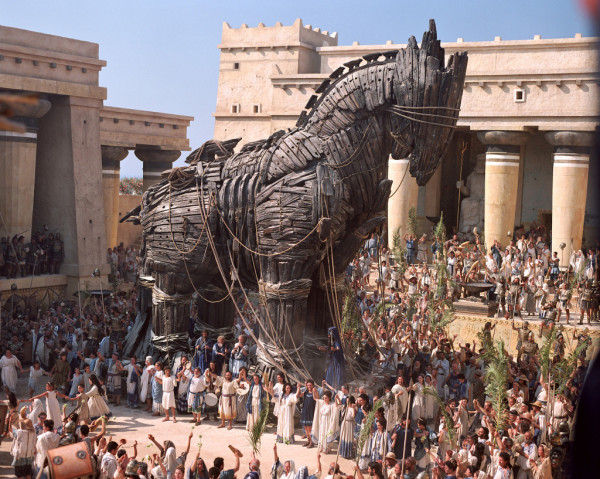 Greece will default on its debt and when that happens, we will see the turn in its economy. Britain exited the Great Depression when it abandoned the Gold Standard and was the first to rebound. That was an example that George Warren used to convince FDR to devalue the dollar and it worked. Austerity is the killer for it send the value of the currency into a bubble top with purchasing power as assets turn to dust. France was the last to exist the Great Depression until they had to abandon the Gold Standard fixed high levels only after the USA.

A country-by-country analysis is required for this question and that will take up way too much space. But this will be covered in a report next year.

« The Dow – To Be or Not To Be – Blowing Bubbles or Hot Air?
Market Updates »