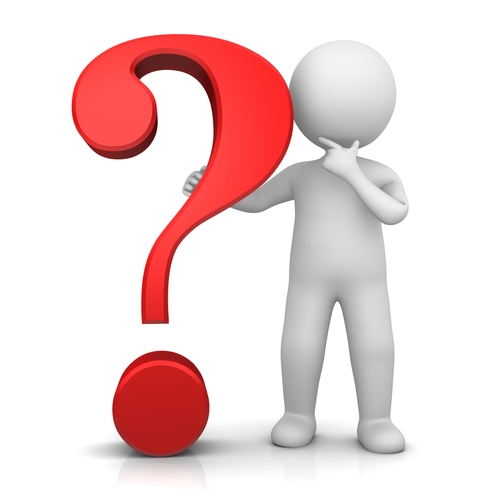 QUESTION #1: If China is held liable for the virus damage then why could we not void all the bonds they hold as a payment for their damage to our economy? That would free up some debt and be a stimulus as well it would seem to me. The CCP is working every day to bring down the USA and this release of a virus that has crushed our economy. Yes, this is part of a global cabal for sure.
MTB

ANSWER#1: If the US, Europe, or Canada ever did that, they will forfeit their credit standing and nobody else will ever trust them again.

QUESTION #2: Why are you pro-Republican and anti-Democrat?

ANSWER #2: I understand it may come off that way, but I do not believe this is what you would remotely call a standard Republican v Democrat election. Don’t forget, when Trump was first elected, even the career Republicans were against him. Remember Lyndsey Grahm smashing his phone and John McCain saying he did not want Trump at his funeral. I have dealt with Washington for a long time. When Reagan was elected, he was just a state governor with no Federal experience. They told me back then that they were not happy but they would train him. Traditionally, they DO NOT like outsiders. It has ALWAYS been that way.

I do not see this as a normal election. I think Biden is mentally not all there. They want someone who is NOT hands-on like Trump. The bureaucrats want to run the government and the president just gets in the way. I see Biden as the same a Bush, Jr. who had no clue what Cheney was doing. You do not see him running around giving speeches even like Obama. Biden is a place-holder. My fear is that this Great Reset is a real agenda and they are trying to take over the United States. Why do you think all the Tech companies are blocking anything negative about Biden? They have been promised a piece of the action when the digital currency is introduced. The Democrats have already put in legislation to create the digital dollar. Perhaps you have no problem getting a Digital Passport to be able to travel anywhere. They will be coming. This will be just like the Nazis – Papers Please! Social Media tycoons have censored Trump 65 times – Biden ZERO!

I know many of these people. They have done everything they could possibly do to discredit me because we were the largest institutional adviser in the world. They are scared to death of that. Our computer writes over 1,000 reports every day on every instrument around the globe. Nobody covers the world like this and nobody correlates the world which allows us to see a tsunami coming which is not domestic in origin.

I am independent. I am not a fan of career politicians regardless of their party. I have worked on both sides of the aisle. I have seen politics close up.

It’s interesting. My practice had a board meeting. There were 14 people gathered around a group of desks arranged in a circle. Of the 14 only 4 were wearing masks. The younger partners.

When dealing with patients, I take my mask off and allow my patients to do so as well. I tell them that they know the risks via the TV and to do what they want. Interestingly, the at-risk really old and immunocompromised keep their masks on. Only 3 patients and family kept theirs on. The rest are relieved to take them off. The 3 were Biden supporters. I asked.

You ever have a moment in your life where you did something because you were caught up in the moment, like-minded people around you? Reinforced by the echo chamber of the message repeatedly playing. Later you think, damn that was stupid. These were typical events when you were young and dumb. I think people are caught up in the moment and can’t see beyond. As my First Sergeant use to say, “The masses are asses. “

A lot of people can’t think for themselves nor evaluate data well or both. I’m not an expert but at least I question and try. And it’s not just individuals but groups as well. What’s the difference between Australians and Americans? They were caught but we weren’t. I think this translates to the difference between national character as well.

REPLY #3: You are correct. I see people driving alone even with masks on. Even the box I bought of masks states plainly these masks “do not eliminate exposure to the risk of any disease or infection.” Yet if you do not have one, they tackle you in Australia, the third time without one you go to prison in France, and you will get beaten in many other parts of the world without one. It really has become insane.

QUESTION #4: Yesterday where you talking about a big reset in the economy, on the first hand here in Europe there Europe states are redoing all present dept to perpetual bonds.
It sounds very nice but there are a few things bothering me. What will the consequences be for central banks, pensions funds, and others sitting with those bonds? If they have a return rate of 0% or lower are the value in the practice zero or negative. Unless it’s possible to force the state to redeem those in the future. Overtime will they have no value at all because inflation will destroy them.
If Europe and the world will go over to a two monetary system with digital currencies, are they going to have a two monetary system?

If it should work over the whole world could it be a problem to run this currency on their own servers, or will they be forced to use the new blockchain infrastructure being built now? If they move swift and smart should it be possible to do it to a new global currency? It will be very hard for other states to stop it if it’s backed up of states, and if they are first and are grown big will block a lot of other actors.
Are there other realistic ways to destroy money or debt? If I recall right has Argentina been doing default. How many years did it take for the country to come into world society again? What were the consequences for ordinary people? You have both poor middle-class and rich without doing a definition of what you need to earn or own to be in each group.

I have another issue as well. Regarding trading between the Western and Asia.
Are we not shooting our self in the foot there? You have been traveling a lot in Asia I have been there some as well. I’m always impressed by how hard people are working and educate themself. A high educated people are in today’s world hardcore as I see it. There should we look at our own schools and education system, is it possible to compete with it? I know it’s a good chance Asia and China will take over. It’s not that strange they got the people and people are well educated that’s not stoppable, we have to adapt. If we do not handle our cards well here will we need to sell cheap sun cars to the Chinese when they are doing a holiday?

We have a third issue as well.
No matter what they think is good or bad. Chinese Japanese cultures are very old. Actually much older than the Roman imperial and it has lasted for a much longer time. Those cultures and their way of solving problems over centuries must have some benefit otherways should they not survive for so long time. As I understand it is just Xi Ping the last emperor in a long row, even if it’s under the “communist” flag, Chinese is not communist now if it not suit there political purposes. You have been there and I’m sure you have seen a lot of sides of the country.
Both countries imperials and companies has it up and downs.
Regards
BK

ANSWER #4: The central banks holding the debt will simply become part of their capitalization. I have been in meetings with Central Bankers and pointed out the problem with pension funds already even at 1%. I have explained that they will have to provide some yield in return at least 3% by our calculations in exchange for making them perpetual. They will not default outright like Argentina. Politically that would be disastrous internationally. Keep in mind, even these perpetual bonds will eventually be traded just like the British Consols.

As far as China is concerned, there seems to be just this desperate need to have an enemy. They get to blame the COVID mess on China, despite the fact that it has been the reaction in the West that is the crisis – not China. I explained from the outset this was a natural virus and not a biological weapon for the kill ratio was too low. It may have been created in a lab, but it was still in the category of a natural virus rather than a weapon. That rules out any deliberate attack by China. 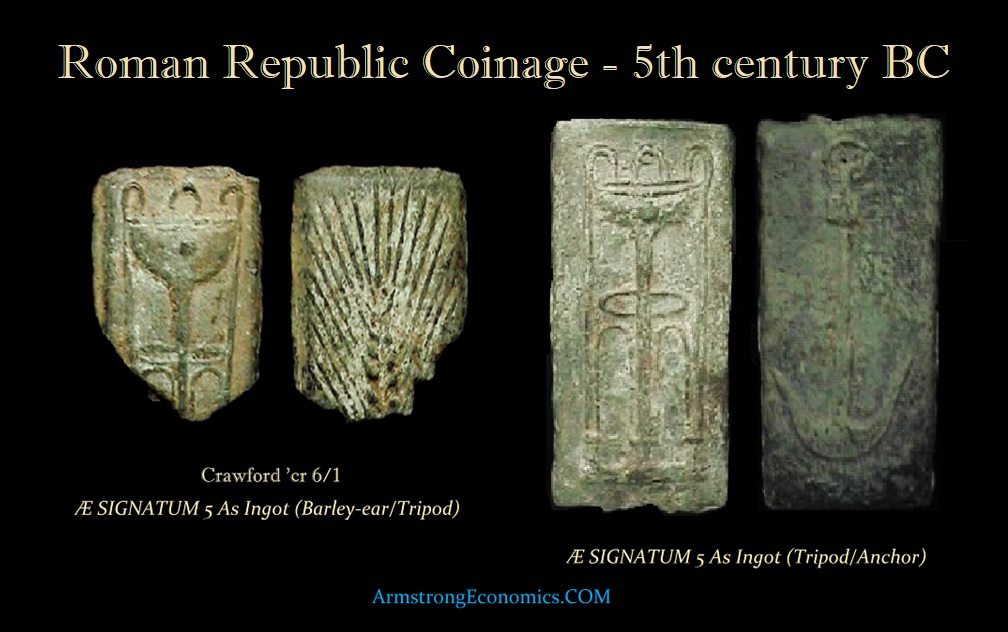 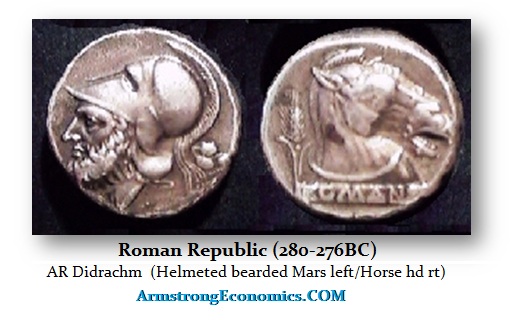 Your third question needs to be corrected. The first unified Chinese coinage began only about 240BC. Prior to that, there were the Waring State issues like knives. The Roman Imperial did not begin until 27BC, which is correct. However, the Roman Republic began with bronze coinage much earlier. Their first silver coinage appeared in 280BC which was comparable to the Greek weight system – a didrachm.

That issue aside, the primary difference is that Western culture thinks in a straight line. Asian culture understands everything is a cycle. That is a major difference.

« The Fall of the United Nations
Your Comments & Questions »