QUESTION: Marty; You gave the resistance in the Dow at 20,158 and it stopped at 20,155. Gold you gave a buy signal at the close of 2016. You give us specific numbers to reach for a bounce or a collapse. Gold is rallying now on claims that the latest run up is attributed to the uncertainty about President Donald Trump’s political agenda. At the conference you warned about such a bounce if we did not close lower for 2016. This seems to be just an excuse to explain a technical rally. Can you shed any light on this?

PS: see you in Hong Kong. Also thanks for not just talking one side of a market like the goldbugs. 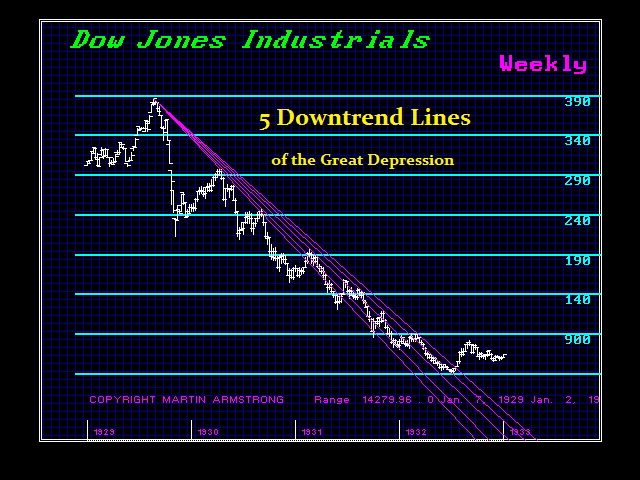 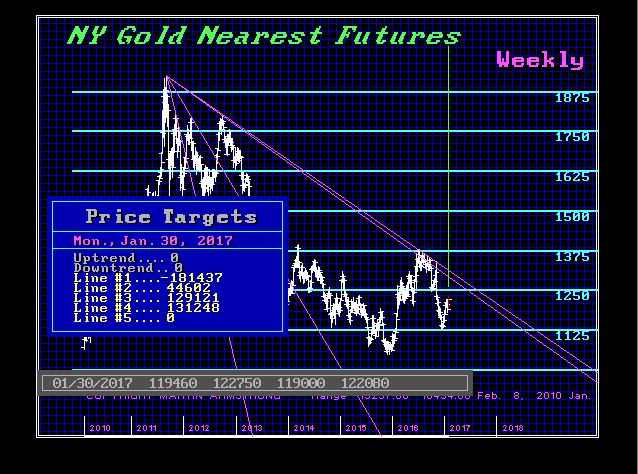 ANSWER:  In any market, if someone only speaks about one direction, that is not an analysis – it is propaganda for some reason or another. All markets rise and fall. You cannot find any market that simply moves in one direction. Even the Dow Jones during the Great Depression made five FALSE rallies exceeding the Downtrend Line just to still move lower. Markets routinely create bull and bear traps. Keep in mind that the most powerful move up or down always requires the slingshot requiring a TRAP. That is the fuel to make markets run. Rallies that struggle to push higher like we see in gold or the Dow right now are not indicative of breakouts NOR major highs – but are more often traps.

In gold, we currently have 4 false breakouts to date so we are getting close to the turn. That Downtrend Line stands at the 1312 area now on the weekly chart. Perhaps this will be the fifth false move if we get through that monthly number we provided. We would need to get above the Downtrend line and still close above 1362 on a weekly and monthly basis to say OK – a real rally is underway. 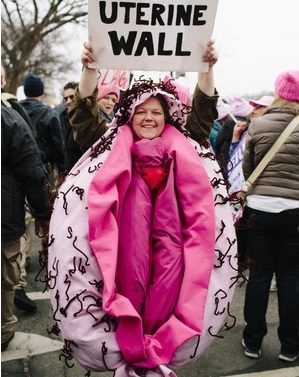 This is the whole purpose of the Reversal System. Markets are far more precise than people will accept. How many people want to blame me personally for market movements rather than try to understand that there just may be something hidden behind the appearance of randomness. Hey I wish I was wrong on the long-term direction of things. The future is not something I would like to be around for. I wish I could just say – Scottie! Beam me up! The people who hate the dollar and cheer gold and can see nothing else just want revenge against society for being short-changed in life. Get over it. You really need help. What you put out in hate comes back at you. The stiff cold weather in Europe is already causing food shortages in Europe and this move down in the energy output of the sun looks to be far worse than anyone imaged. Remember; you can’t eat gold.

In that post last year I wrote “2017 [is] looking like the start of the trend where confidence collapses in government.” That seems to be an understatement. So we are on our way. It still looks like 2018 is the year of insanity.

The greatest risk of war does not come from Trump’s policies, but the collapse of the EU thanks to mismanagement. I just provided a fairly detailed report on the Eastern Borders of Europe and the risks that exist there. The EU is inviting World War III because they REFUSE to admit that the refugees have created a huge problem that is tearing Europe apart.  Remember what Caesar said? Divide & Conquer! The international media prefer to ignore that in many German regions local gyms have been confiscated and used as refugee shelters. Students have lost sports in many towns and this creates a number of difficulties and provokes social conflicts due to resentment. 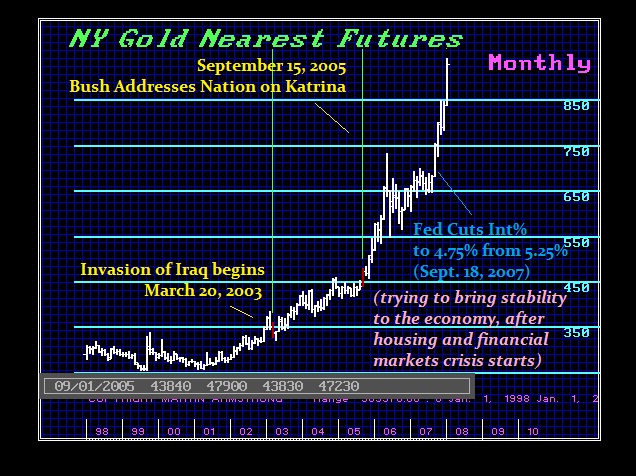 The key to gold has never really be geopolitical. Gold rallies come really when confidence declines in terms if governments collapsing or the collapse of a monetary system. That can be due to a military invasion or a financial collapse. A crack in the euro will be more bullish on a sustainable basis for gold in euros than just a brief military confrontation when it come to gold in dollar terms.

We can see from the above chart that when the Iraq invasion took place in March 2003, gold declined in dollars. Why? Because it was not seen as a formidable foe to upset the world economy. If you were in Iraq, gold was your hedge against the collapse of your currency. But that was not seen in terms of dollars outside of Iraq. Keep in mind that during World War II, nickel was more valuable than silver so the 5 cent coins (we call nickels) were replaced with silver. It was World War I when commodities soared, but after that experience, they imposed price controls for World War II.