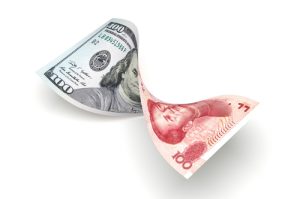 Russia is not the only country turning to the yuan. Beijing is in talks with Saudi Arabia to begin purchasing oil with their own currency opposed to the USD. Saudi Arabia has long had a volatile relationship with the US, and seeing the harsh sanctions imposed on Russia is only making the yuan more appealing.

Around 80% of global oil sales are exchanged in dollars, with Saudi Arabia using the USD exclusively for oil sales since the 1970s per agreement with the US government. Crown Prince Mohammed bin Salman was unable to have diplomatic relationships with President Biden after the publicized 2018 assassination of journalist Jamal Khashoggi. “We were going to make them the pariah that they are,” Biden stated in 2019. Add to this America’s nuclear negotiations with Iran and dismissal of Saudi Arabia’s request for support with military operations in Yemen.

The illusion of the dollar being an impenetrable safe haven has shattered due to Biden’s policies. Countries now know that their dollar reserves could be confiscated or frozen at any time and deemed utterly useless. The Saudis have been toying with the idea of accepting the yuan for oil payments for the past six years, but recent events just may be the final straw.