Biden Begs OPEC+ to Delay Vote Until After Midterms 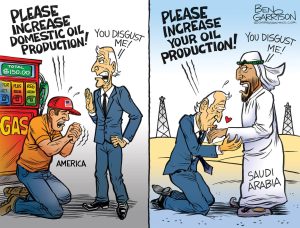 Joe Biden is playing dirty before the midterm elections by urging Saudi Arabia to delay the OPEC+ oil vote until December. The Saudis, who unofficially run OPEC+, do not respect Joe. OPEC+ voted on October 5 to cut oil production despite Joe’s desperate pleas. In a desperate attempt to avoid further embarrassment, Biden asked them to delay the next vote.

The Foreign Ministry of Saudi Arabia replied with a letter rejecting Biden’s requests. The kingdom said they declined Biden’s request in October for purely financial reasons. They reject the idea that they declined on behalf of Russia and said that they are not interfering in international conflicts. Worse, they believe that Biden is promoting the idea that Saudi Arabia is against the United States. In reality, they want to make money and be left alone. Oil is what keeps their kingdom afloat. The letter confirms their relationship with the United States is “strategic” as a trading partner and nothing more.

As for pushing back the next vote, that is not in Saudi Arabia’s interest. They explained that “economic analyses indicate that postponing the OPEC+ decision for a month, according to what has been suggested, would have had negative economic consequences.”

White House officials have confirmed Joe’s election interference. “We presented Saudi Arabia with analysis to show that there was no market basis to cut production targets, and that they could easily wait for the next OPEC meeting to see how things developed,” National Security Council spokesman John Kirby said in a statement. Yet, the White House swears this decision has nothing to do with the midterms.

« Kanye West – Can the Banks Cancel Someone?
Voters’ Remorse »