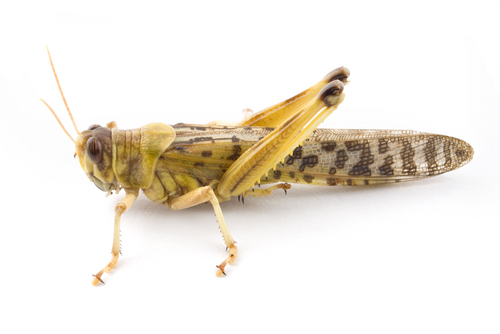 Locusts have plagued farmers for millennia. When we look at the plague of locust in Africa which is now spreading to China, it brings up visions of the Book of Exodus, which recounts around 1446 BC the Egyptians experienced an exceptional ravenous Plague of Locusts which was the eighth Biblical plague. As Exodus describes, “They covered the face of the whole land, so that the land was darkened, and they ate all the plants in the land and all the fruit of the trees that the hail had left. Not a green thing remained, neither tree nor plant of the field, through all the land of Egypt.”

Plagues of Locusts had been recorded in history since ancient times. Just where these plagues have taken place is interdependent with the weather. The insects can arrive quite unexpectedly when even the wind changes direction blowing them in from far distant lands. They also seem to swarm more aligned with cold weather and may reach plague levels during climate change. Besides the famous Biblical account as the eighth plague, the Ancient Egyptians also carved locusts on tombs in the period 2470 to 2220 BC about 1,000 years prior to the Biblical plague about 1446 BC. We even find mention of such plagues by Homer in his Iliad recording locusts taking to the wing to escape a fire. Looking at the Quran, we also find mention of locust plagues.  Pestilence in the northwestern provinces of China during 311 AD resulted in the death of 98% of the population. They blamed the crisis on locusts. There was a link also with the rise in the population of rats that spread disease since they devoured the locust carcasses. In the ninth century BC, the Chinese authorities even appointed anti-locust officers suggesting that the problem was serious.

Aristotle was interested in the problem and conducted studies into locusts to try to understand their breeding habits. The Roman historian, Livy, also mentions that there was a devastating plague in Capua in 203 BC. Livy associated human epidemics following locust plagues which were most likely caused by starvation. Livy, on the other hand, associated the rise in human disease with the stench from the putrifying corpses. Nevertheless, there were realizations taking hold that there was a clear link of human disease outbreaks to locust plagues.

From a cyclical perspective, using the data from China, there were 116 major outbreaks over a period of nearly 2000 years. The average plague event seemed to be 17.2 years which seems to align with Pi. Research has discovered that serotonin, the brain chemical involved in depression and anger in humans, turns out to have another surprising role transforming desert locusts from a solitary lifestyle into swarming voracious insects that can devour orchards and fields in a matter of hours. The findings were published in Science, which may point the way to new locust-control methods. They are a solitary insect that shuns other members of its species and flying only by night. However, cyclically, when their densities reach a certain threshold, locusts become gregarious. It is at this time when they seek out one another’s company and reproduce explosively. This is when massive swarms emerged and they then can move thousands of kilometers beyond their usual habitats. The behavior changes unfold with a complete physical makeover, taking several generations, during which the insects first turn pink and eventually black and bright yellow.

During the last two millennia, locust plagues continued to appear at irregular intervals with the main recorded outbreaks of the desert and migratory locusts occurring in Africa, the Middle East, and Europe. Other species of locusts caused havoc in North and South America, Asia, and Australasia. The Bombay locust (Nomadacris succincta) was a major pest in India and southeastern Asia in the 18th and 19th centuries but has seldom swarmed since the last plague in 1908. Such swarms can ravish crops, causing famine and consequent social unrest. The Chinese for more than 2,000 years have had officials recording details of the outbreaks with respect to their frequency and severity, the affected areas and the number of people who died of famine following infestations. A recent study shows that locust swarms in China align with periods of climate change turning colder. (see: Thousand-year-long Chinese time series reveals climatic forcing of decadal locust dynamics.)

The desert locusts which are swarming right now have a long history of devastation. Owing to the destructive habits of locusts, they have been a representation of famine in many Middle Eastern cultures. During the spring of 1747, desert locusts arrived outside Damascus eating the majority of the crops and vegetation of the surrounding countryside. Historical accounts described them like a black cloud that blocked the sun. They covered everything including the trees and the crops. There was also a major swarm in 1915, known as the Ottoman Syria locust infestation, which devastated Palestine, Mount Lebanon, and Syria. Right now, the 2019–2020 swarm has impacted East Africa infesting Ethiopia, Kenya, Eritrea, Djibouti, and Somalia with the desert locust. This is what has spread to Pakistan and appears headed to devastate China. The government in China is now facing a Locus Plague threatening the harvest. These are the desert variety and officials are now warning local authorities to prepare for the possible arrival of the voracious insects.

The desert locust (Schistocerca gregaria) which is now threatening China is particularly notorious. Found in Africa, the Middle East, and Asia, they inhabit some 60 countries and can cover one-fifth of Earth’s land surface. Desert locust plagues may threaten the economic livelihood of one-tenth of the world’s humans. Such a desert locust swarm can be 460 square miles in size and pack between 40 and 80 million locusts into less than half a square mile. Each locust can actually eat its weight in plants each and every day. Therefore, a swarm of such size would eat 423 million pounds of plants every single day.

The rise in such a Plague of Locusts is by far a serious event which strangely may they align with global cooling. They tend to result in major famines and disease. In the Horn of Africa, the situation remains extremely alarming, specifically Kenya, Ethiopia and Somalia where widespread breeding is in progress and new swarms are starting to form. This is representing an unprecedented threat to food security and livelihoods at the beginning of the upcoming cropping season. However, locust swarms can travel vast distances. In 1954, a swarm flew from northwest Africa traveled to Great Britain. In 1988, another made the lengthy trek from West Africa to the Caribbean across the Atlantic Ocean. 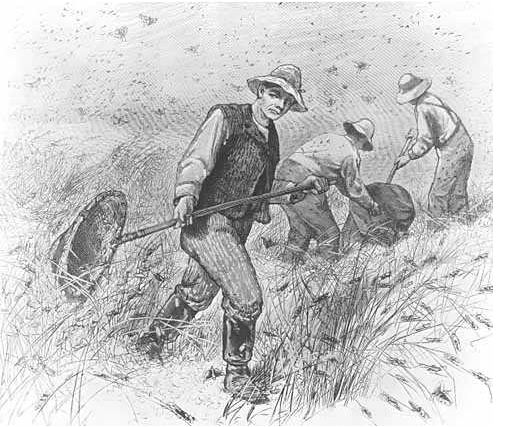 On June 12, 1873, farmers in southwestern Minnesota saw what looked like a snowstorm coming towards their fields from the west. Then they heard a roar of beating wings and saw that what seemed to be snowflakes were in fact locusts. In a matter of hours, knee-high fields of grass and wheat were eaten to the ground by hungry insects.

The Rocky Mountain locust’s dramatic descent was just the beginning. For five years, from 1873 to 1877, grasshoppers destroyed wheat, oat, corn, and barley fields in Minnesota and surrounding states. In 1876 alone, grasshoppers visited forty Minnesota counties and destroyed 500,000 acres of crops.

The extinction of the Rocky Mountain locust has been a source of puzzlement. It had swarmed throughout the west of the United States and parts of Canada in the 19th century. Albert’s swarm of 1875 was estimated to cover 198,000 square miles (an area greater than the area of California) with some 12.5 trillion insects. The last specimen was seen alive in Canada in 1902. Recent research suggests the breeding grounds of this insect in the valleys of the Rocky Mountains came under sustained agricultural development during the large influx of gold miners. It remains possible that the gold miner destroyed the underground eggs of the Rocky Mountain locust.