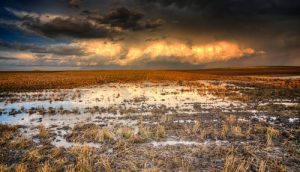 The damages from the hurricane are still being evaluated, but preliminary estimates state that Ian caused Florida’s agriculture industry to lose up to $1.56 billion. Around five million acres of farmland were destroyed by the hurricane, 60% of which was grazing land for cattle. An additional 500,000 acres were affected but not destroyed. Florida produces around $8 billion in agricultural goods per year, so this is a significant blow to the industry.

The Sunshine State was already experiencing hardships prior to Hurricane Ian, with some estimates saying the industry would decline by a third this year due to temperatures and disease.

“The impact on Florida’s affected commodities cannot be understated, especially the heartbreaking damage to Florida citrus, an industry already facing significant challenges,” state Agriculture Commissioner Nikki Fried declared. Orange juice alone is expected to cause a $304 million loss. The US Department of Agriculture said that orange production was already 32% down YoY, marking the smallest harvest in eight decades.

Up to $393 million may be lost from destroyed vegetable crops, while horticultural crops may experience a $297 million decline. Cattle is expected to decline by over $220 million.

The true damage cannot be assessed until the fields dry up. None of these figures account for inflation. Natural disasters will only contribute to rising food prices and shortages.