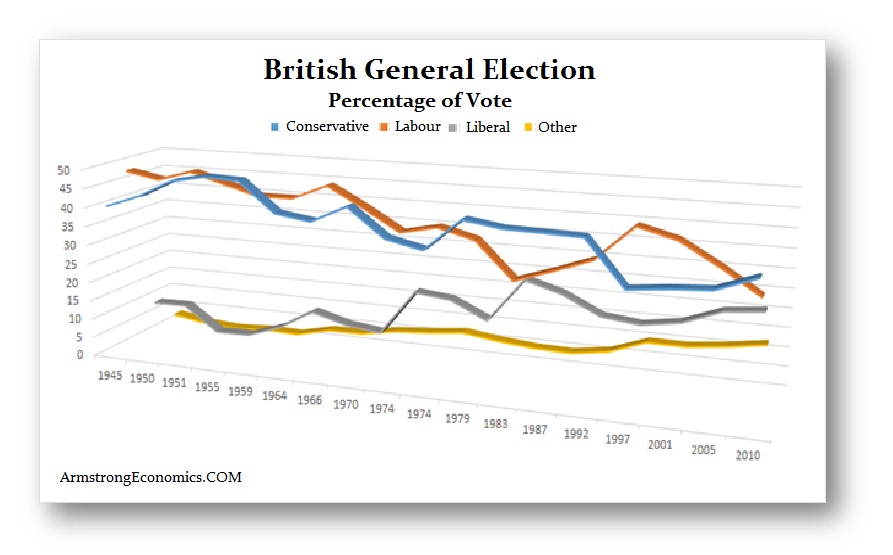 The British elections are coming up on May 7th. I will be across the pond for that event. This is the tightest election without any clear winner since 1992. The United Kingdom Independence Party (UKIP) now has about 15%, and the Liberals, as well as the Greens are below 10% and rapidly becoming a waste of voting rights.

The Telegraph illustrates the close run in this race. Cameron (Conservative) relied upon the Liberals to gain the required 326 seats for a majority. This time, neither party seems likely to be in a position to rely upon the Liberals and Greens, as UKIP appears to be the rising Third Party holding about 14%. The real interesting factor is that the polls also show that 50% of the voters are not really committed to either party and will vote as they see fit perhaps on the spur-of-the-moment.

The issues among Labour voters seems to be concern with the influx of migrant labor, but so do the more traditional Conservatives. Labour fears job loss and the Conservatives fear the erosion of “British values.” The reasoning may be different, but the end result is the same.

UKIP has yet to win any general election House of Commons seats. Its first two members of parliament were midterm defectors from the Conservatives who won the subsequent local by-election, or one-off vote triggered by the death or resignation of a sitting candidate.  This presents an interesting trend, for if they perform as expected so far, it looks like they will decide who the majority is, if there is no surprise change in the polls.

There is clearly a serious underlying pattern of profound dissatisfaction with Britain’s main parties. This is the same trend that we are starting to see in the United States. The middle class has been screwed every which way by government and this is starting to come back in the political uncertainty that has not been witnessed in a very long time.

The critical support for the Conservatives lies at 31% and Labour at 34%. This implies there is a slight bias toward Labour. However, the maximum resistance will stand at 42% for the Conservatives and 41% for Labour. Meanwhile, UKIP resistance will be at 19% with critical support at 9.2%. A failure for the Liberals to get above 11% may spell the death of that party. The Greens are coming in at 3.2% at the critical threshold. A break of that level will warn of the death of that party as well.

The election appears to be a bit premature. This does not rule out a vote of confidence in later 2016 or 2017. Either way, UKIP may be in a classic position by 2017. As for this election, they may be the key factor in forming any coalition government.