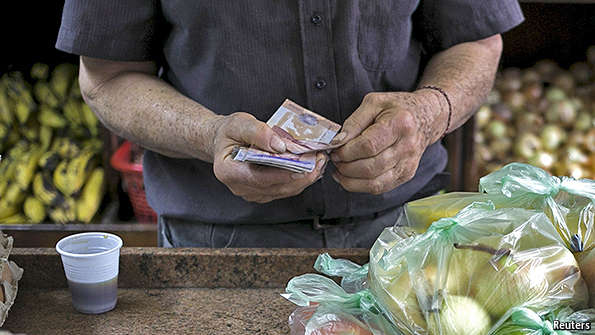 The hyperinflation in Venezuela illustrates the real causes behind such events — the total collapse in the confidence of government. It is not a question of money supply for that is akin to putting the cart before the horse. As confidence collapses, people trust the government less and resort to using the currency of neighboring countries. This occurred in Germany and other Eastern European countries following the hyperinflation after World War I. A collapse in confidence causes the government to issue more and more money. Those who survive such events rely upon tangible assets and the currency of neighboring economies.

This is why the dollar is rising right now; it is not that the entire world is moving into hyperinflation, but rather the Europe is declining with the confidence in emerging markets. As that unfolds, the ONLY available game in town to park money becomes the U.S. dollar.

There is ZERO chance of the USA moving into hyperinflation. For that to unfold other countries would need to be strong and Americans would then resort to the currencies of other countries. We are heading into a Sovereign Debt Crisis where effectively this is a reboot of the entire system. The control-alt-delete keys are being pushed.