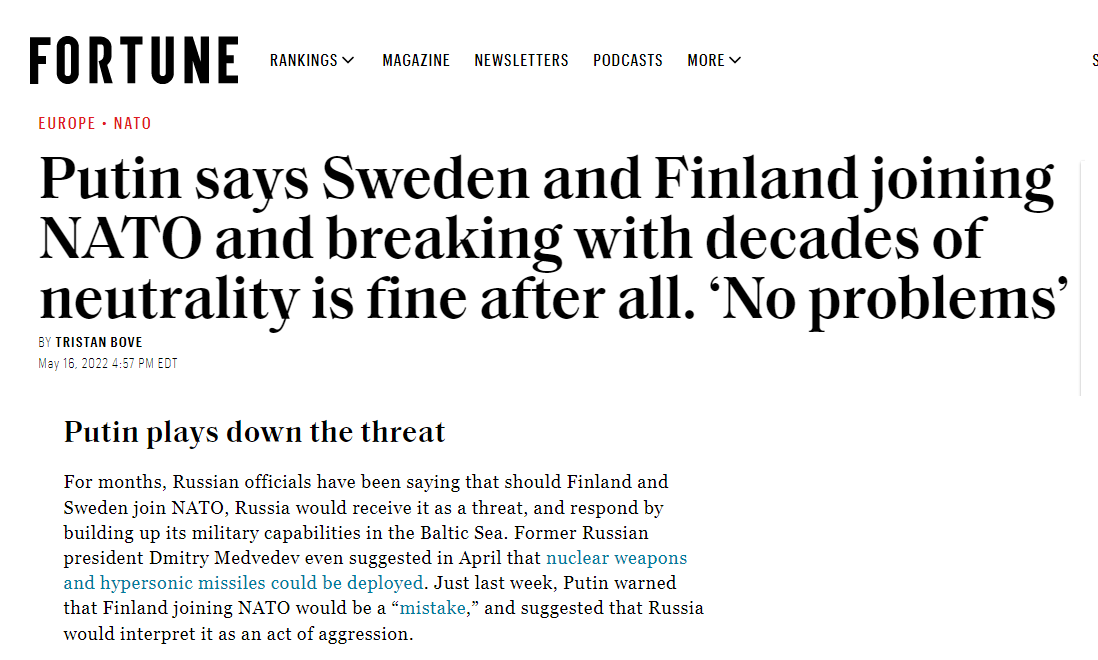 COMMENT: It appears your Putin is backing down as reported by Fortune. That must mean that Ukraine is winning!

REPLY: I have warned that Putin is a reasonable man. The hatred the Neocons keep painting him with is not just unfair, it is a strategic ploy to DEMONIZE your opponent to justify your own position. They used that same tactic against Trump.

I have tried to explain that Putin is the ONLY rational world leader today. I have warned that if you remove Putin, you will be shocked at what stands behind him. Putin has been called “weak” behind the scenes in Russia because he has been too soft on Ukraine. All the comments about attacking Finland and Sweden are from the second tier — not Putin. Even in Ukraine, Putin made NO effort to conquer the country. The first thing you do is take out the power grid, the communications, and then the water supply. The US did that by invading Iraq. That is STANDARD operating warfare tactics. The fact Putin did not do that showed he was only interested in liberating the Donbas, which is predominantly Russia.

Ukraine has been putting out nothing but propaganda. Even the so-called Bucha massacre has come with allegations. There is NOT one photo showing all these slaughtered dead bodies. I have friends in Donbas as well as Kyiv. If you dared to bring a bottle of Russian vodka for dinner with a Western Ukrainian, it is a serious insult. The sheer hatred there is unimaginable. It is on par with the hatred that had existed in Ireland between North and South.

I am warning you, take Putin out, and you will peel back the onion and find the Russian Neocons who hate the American Neocons on an equal footing. I fear that you will see that Putin will not be there for the 2024 election. Who takes charge after 2024 may very well use nuclear weapons and irradicate Kyiv. Putin is nostalgic about Kiev (Russian Spelling) and regards it as the first capital of the Russ – origin of Russians. Putin will not flatten Ukraine. The second tier would not think twice.