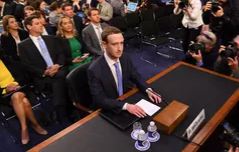 Mark Zuckerberg admitted that Facebook aided the FBI in manipulating the 2020 Presidential Election. This is huge news that proves the FBI had direct involvement in helping Joe Biden become president. Zuckerberg opened up to Joe Rogan and revealed that the department contacted him to say Russia was planning to release a disinformation campaign, and they needed him to cover it up.

“We just kind of thought, hey, look, if the FBI, which I still view as a legitimate institution in this country, it’s like very professional law enforcement, they come to us and tell us that we need to be on guard about something, then I want to take that seriously,” Zuckerberg told Rogan. Zuckerberg ordered Facebook employees to remove any story regarding Hunter’s laptop. When the New York Post first broke the story, Facebook downranked the story while Twitter simply removed the Post from its platform.

It is no secret that social media platforms smeared Trump while promoting Biden. Twitter even deactivated the then president’s account prior to the election. Yet, the FBI’s involvement brings this to a new level. The Steele Dossier, the Russian disinformation campaign, and admittedly hiding the contents of Hunter’s laptop from the public shows the extent to which those in the establishment disregarded democracy. The FBI is still harassing Trump because the establishment is terrified of him coming into power again and dismissing the global agenda. The FBI has become the left’s personal mob and is a danger to America.