Here is a video that was taken in Delaware county PENNSYLVANIA at camera number 7. This woman is filling out ballots for Biden. It is one thing when Obama won and you went about your life because not even he sought to change the structure of the United States. Here we have clear intentions to destroy the fossil fuel industry, end cars, and push this New Green Agenda. To make up for all the jobs destroyed by a lockdown which will be the same as Boris Johnson has imposed.

The object is to “crush” the virus which will be a national lockdown following the same tactics in London. She also says she will put money in the pockets of those who lost their jobs, which is also what Boris Johnson has implemented – 80% of your wages by Guaranteed Basic Income. The lockdown will destroy the jobs to end commuting to help reduce fossil fuel consumption and they claim they will create millions of jobs, but their vision of rebuilding the economy is according to Klaus Schwab’s Great Reset. They do not mention how many jobs they will destroy in the process. They deliberately did not lay out any specific plan because the people would never have voted for that. But we will see what the real agenda is all about. 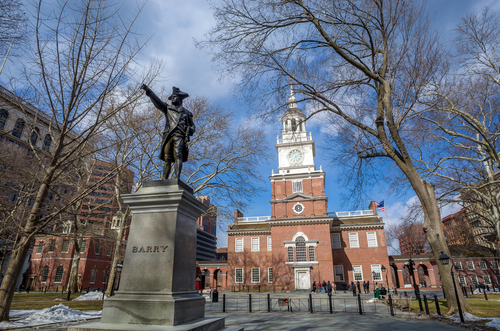 This was the courtyard where the Declaration of Independence was read to the people. It promised we all had the same rights to pursue happiness. Communism never caught on in the USA and those who voted for Biden had no idea of the real agenda behind the words. In America, people came here for many saw that the streets were paved with gold. It was the land of opportunity where you could own your own home where in London you leased your home for 100 years and you were never allowed to own it. In that respect, Marx was correct. It was the oppression of the landed-class against the poor who were never allowed to own property. They set sail for America because it was the land of opportunity. Every person had the equal opportunity to become rich which is why CFommunism never took hold. Obama proved that even an African American could become president. Yet this is what they want to change.

As one reader just commented: Hi Mr Armstrong,
You are correct…cycles end where they began. Philadelphia was the birthplace of freedom and will be the death of freedom.

« Mainstream Media told Not Allowed to Investigate Voter Fraud
What does a Biden World Look Like? »