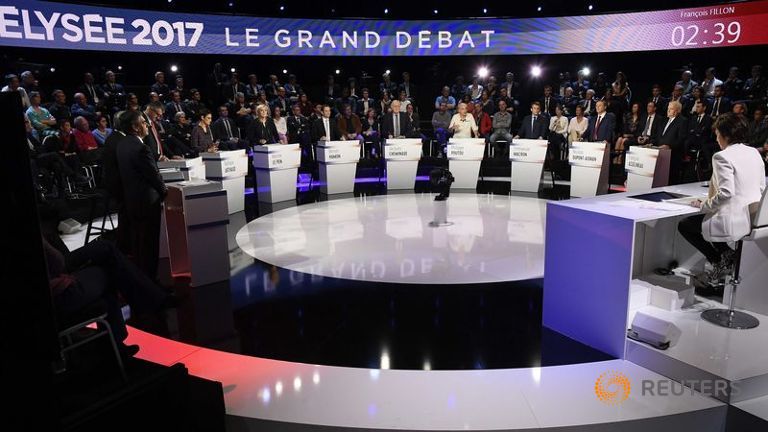 France holds its first round of voting on the 23rd of April, 2017. Unless one candidate wins more than 50% of the vote, the two leading contenders will go to a second round on May 7th. The French Debate took place and of course Emmanuel Macron is who the press is cheering as the victor. We have seen before how the press tries to manipulate the public in Britain against BREXIT and in the USA against Trump. The press’ agenda in France is no less corrupt.

Macron attacked Ms Le Pen’s nationalist proposals declaring “Nationalism is war. I know it. I come from a region that is full of graveyards,” Reported Reuters. Macron is showing how nasty he really is as a person. He then attacked Le Pen’ dead father “You are saying the same lies that we’ve heard from your father for 40 years.”

Francois Fillon, the scandal plagued conservative who paid his wife to be an assistant more than the President of the United States is paid, said that France needed Europe when up against the US and China. Fillon would never change anything and doom France in the process as did Macron. Indeed, Fillon tried to also attack Le Pen and she responded to Mr Fillon: “You shouldn’t pretend to be something new when you are speaking like fossils that are at least 50 years old.”

Francois Asselineau, who is the nationalist right-wing outsider, chimed in and said that he was “the only true candidate of Frexit”, and promised to trigger Article 50 as has Britain to begin the divorce from the EU immediately if he were to win power.

While the press is now touting Macron as the leader, what is very clear is that the failure to elect Le Pen will really be devastating for the EU. Why? Because a Le Pen victory would be far more of a soft-landing for the EU and actually raise hope that Brussels would be forced back to just a trade union rather than a political union, demanding the surrender of individual nation sovereignty. That will actually raise the risk far greater for a European war. Brussels will wipe its brow and declare “populism” is dead and press full stream ahead to federalized Europe.

But the economics of the EU are crumbling and this indicates that no matter how hard Brussels tries to keep this mess together, it will crumble and fall apart. A Le Pen victory would be the soft-landing and political reform would then be possible in Europe. A Le Pen defeat, will only invite civil unrest that can turn to war within Europe because Brussels will not reform and it will only get worse.

You have already the Arrogance of Brussels telling Poland and Hungary they MUST accept the refugees or get out of the EU. That is a totalitarian position and the sovereignty of individual states will no longer matter. The argument are akin to surrendering the United States to be ruled by the United Nations.

« If We Know What’s Coming Then We Are Not Sucker-Punched
How to Make Congress Responsible, fix Social Security & Healthcare? It’s Easy! »