Nancy Pelosi: Inside Trader of the Year 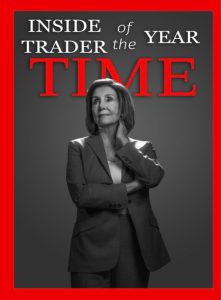 Pelosi knew when to sell! Paul Pelosi, Speaker Nancy Pelosi’s husband, sold off 25,000 shares of Nvidia. A month later, the US government banned Nvidia from selling chips to Russia and China to “address the risk that the covered products may be used in, or diverted to, a ‘military end use’ or ‘military end user.’” Nvidia also happens to produce the A100 GPU in Taiwan, where Nancy’s attention has been suddenly diverted.

The microchip ban for Russia and China could cost Nvidia $400,000,000. Yet, Paul Pelosi managed to save $600,000 by selling his stock off a month before the news broke. Paul claims he does not consult his wife about trades, but what married couple would not discuss millions being moved? This is no coincidence. Paul even knew when to buy as he purchased the stock back in June when his wife was pushing for a multi-billion dollar government grant for the domestic production of semiconductor chips.

The Pelosi family has earned millions through insider trading. In July, Paul earned $5,300,000 after exercising a call option to buy 4,000 Alphabet shares. Not so coincidentally, this occurred when the House Judiciary Committee cracked down on antitrust practices. There have been numerous instances of the Pelosi family earning money through trades that could have been exercised due to Nancy Pelosi’s political insights. This is insider trading, and it is illegal.

Insider trading is so blatant that even the Democrats want to end the practice. Alexandria Ocasio-Cortez tweeted in December 2021: “There is no reason members of Congress should hold and trade individual stock when we write major policy and have access to sensitive information.” Even a broken clock is right twice a day. “It incentivizes this bad behavior,” she added in a separate tweet. So yes, US lawmakers are pushing legislation forward that directly benefits them. This is completely unethical and a threat to overall democracy.