QUESTION: Mr. Armstrong; Why did Comey not present this matter to the grand jury? Isn’t it the role of the grand jury to decide to indict or not?

ANSWER:The rules for a grand jury have been altered to the point that they have been reduced to a rubber stamp. Nevertheless, FBI Director James Comey had to punt and take one for the government in light of the Inspector General’s report on Hillary. The Inspector General was independent under Roman law and was supposed to indict government officials, but under US law, that position has been stripped of such power. Today, effectively, the grand jury has been stripped of all safeguards and this demonstrates that we live in a system where all the protections created by the American Revolution have been wiped out.

Still, Comey could not risk allowing this matter to go to the people to decide because the grand jury comes under the judiciary and not the executive branch. A wildcard remains, as he cannot control such a high profile case where the jurors will know who Hillary is and what this is about. The prosecutor cannot control 100% of the outcome in this type of case. Hence, there is no way Comey would allow a real investigation to take place, and nobody in the mainstream media would dare to explain the truth in this matter.

The idea of a grand jury was to PREVENT political legal persecution. The Supreme Court, over the years, has virtually destroyed the grand jury system by claiming that you have the petit jury in a public trial to hear both sides. The prosecutor can even KNOW of evidence that proves someone is innocent and it is routine now that he is under NO OBLIGATION to present any evidence whatsoever to show he might be wrong.

The Second Circuit Court of Appeals in NYC wrote: “Despite recent movements for revision of grand jury procedure, a prosecutor is not presently obligated to search for and submit to a grand jury evidence favorable to the defense or negating guilt…” (US v Ciambrone, 1001 F2d 616, 622-623 (2d Cir 1979)). This allows the Justice Department to engage in legal persecution and, as Comey has just done, allows them not to conduct any investigation to prove guilt or innocence.

Now, that said, the U.S. Attorney’s Manual states that prosecutors must recognize that the grand jury is an independent body, whose functions include not only the investigation of crime and the initiation of criminal prosecution but also the protection of the citizenry from unfounded criminal charges.” It also states that targets of investigations have the right to, and can, “request or demand the opportunity to tell the grand jury their side of the story.” This pretend right is rarely afforded to anyone who is a target. However, in the case of Hillary, she would have demanded it. On top of that, she is too well-known, so the grand jury may have subpoenaed others without restriction to testify.

Comey would NEVER present the case to a grand jury, yet some may have been politically motivated to investigate Hillary. The grand jury comes under the judiciary and not the executive branch of justice. Normally, they just rubber stamp whatever the prosecutor recommends, but in this case, they know the controversy and might really investigate and call witnesses.

The Supreme Court has chipped away at the grand jury to remove any barrier to government who wants to engage in political, legal persecution. They can destroy anyone at any time. They can throw you in prison, deny bail, and postpone a trial indefinitely while stripping you of any lawyer and imposing on you a court-appointed lawyer who routinely loses 99% of all cases to get the job of working for the court.

In John Stuart Mills’ (1806-1873) classic work, “On Liberty,” he wrote, “Let us not flatter ourselves that we are yet free from the stain of legal persecution.” (Mills 1998, 34.) Yet, the grand jury can investigate on its own. That is the risk that Comey would not take. 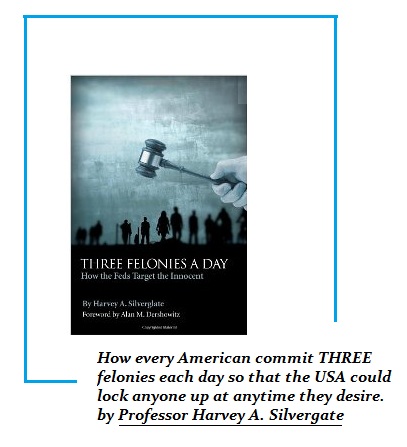 Most people do not know this, but since there are so many laws, the average person commits three felonies every day. There are people in federal prison for paying off one credit card with another (money laundering), withdrawing cash from your account three times at $9,900 each (structuring), shooting a moose out of season, or driving without a license in your immediate possession on federal property. The statute Comey was using for Hillary was just one of many under which she could have been charged. He tried to use only one that requires “intent” so he could excuse the matter.

People have been prosecuted for far less under the following three statutes:

The head of each Federal agency shall make and preserve records containing adequate and proper documentation of the organization, functions, policies, decisions, procedures, and essential transactions of the agency and designed to furnish the information necessary to protect the legal and financial rights of the Government and of persons directly affected by the agency’s activities.

Then we have 18 U.S. Code § 2071 – Concealment, removal, or mutilation of records, which Hillary violated, carries a three-year term of imprisonment and/or fine. Section B also states that anyone found guilty “shall forfeit his office and be disqualified from holding any office under the United States.” This wording is very clear. She should not be allowed to even run for president.

Shall be fined under this title or imprisoned not more than ten years, or both.

Here are just three statutes and you will find people prosecuted under them who have done far less than Hillary has. There is no doubt Hillary SHOULD BE charged. There is also no question that Hillary WILL NEVER BE CHARGED. As I have stated, it is not the Department of Justice — it is the Department of “Just Us”. Once upon a time, the grand jury was a fundamental part of our liberty, but those days are gone.

“In the secrecy of the investigations by grand juries, the weak and helpless-proscribed, perhaps, because of their race, or pursued by an unreasoning public clamor – have found, and will continue to find, security against official oppression, the cruelty of mobs, the machinations of falsehood, and the malevolence of private persons who would use the machinery of the law to bring run upon their personal enemies.”

With all the legal machinations, Comey could not risk a grand jury (people) to fulfill their constitutional duty to investigate Hillary. This was the design of “We the People” to run our government rather than be the “subject” of a monarch (his property). If Comey actually allowed the grand jury to investigate as the Constitution intended, they might have indicted her. OMG! What then? It does not matter if Comey was appointed by Bush, Clinton, or Ronald McDonald; he is a career official and his job is always to vindicate government against “We the People.” When Cade belted out in Shakespeare’s Henry VI, “The first thing we do is kill all the lawyers,” he was NOT talking about private lawyers since you were not allowed a lawyer. The “lawyers” were the king’s prosecutors.