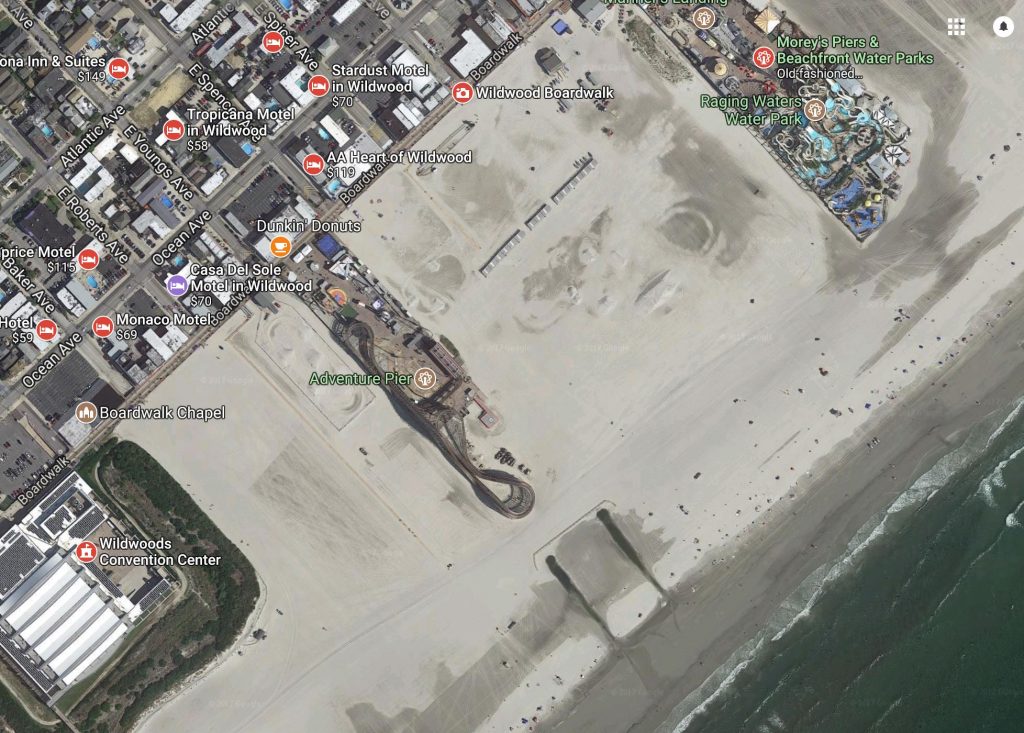 While some of the news coverage was interjecting global warming as the cause of the storm, in fact it tends to work in the opposite direction. This has been a sharply declining period of temperature. I wrote about how this was the year without an Arctic Summer.  This has been the coldest summer in Europe and even in the States on the East Coast during August to early September. I went to visit family in August and had to buy a coat in New Jersey. In Australia there has been the coldest night on record in New South Wales. The warm water colliding with cooler air tends to make for bigger storms.

One of the major news stations was attributing Miami sinking into the water to Global Warming claiming this was PROOF of rising sea levels.  Pictured here is Wildwood New Jersey which was famous in the 60s with Bobby Rydell’s song. I use to go there as a kid. The piers were once upon a time actually in the water. You could go on a pier and fish.

The beach has risen so much in Wildwood it is well beyond the piers today. Is this PROOF that sea levels are falling? No! So the fact that Miami is sinking is by NO MEANS PROOF of Global Warming and rising seal levels. The sea coast rises and falls with every storm, which change the under water topography offshore. Ever since Hurricane Sandy hit New Jersey, there are parts of Long Beach Island that now flood in a rain storm because the underwater typography has changed.

It is NOT Global Warming that is to blame for Miami sinking. It is the simple fact that the beaches always change. I have lived on the beach for probably 30 years. It is like watching a movie out your window. It is constantly changing. The sand rises and falls. It does not remain unchanged. Welcome to mother nature.