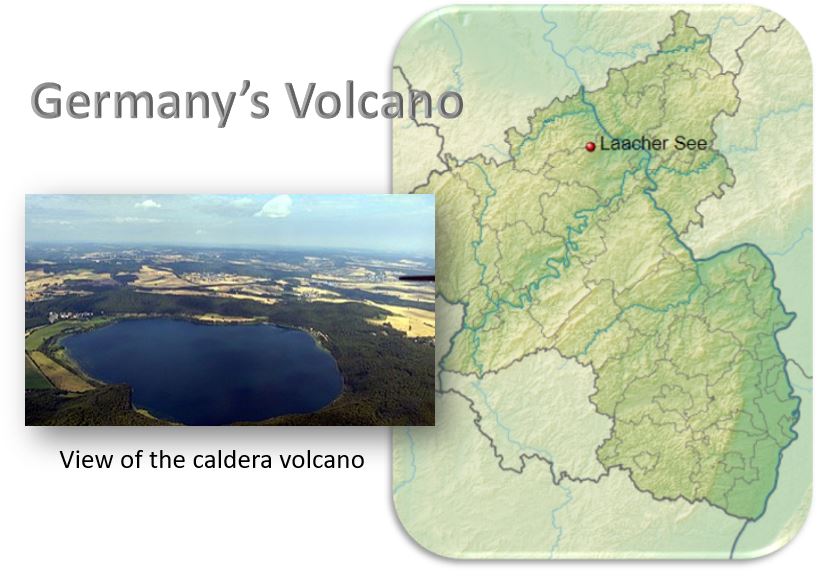 Most people have never heard of a volcano in Germany. Well, the caldera of Laacher See was formed after the Laacher volcano that erupted between 12,900 and 11,200 years ago. Everything collapsed into the empty magma chamber below only two or three days after the eruption, forming what is now a lake. The estimated Volcanic Explosivity Index value was that of 6, which means that this eruption was 250 times larger than the eruption of Mount St. Helens back in 1980. Remains of this eruption can be found all over Europe and is often used for dating sediments. A number of unique minerals, like Hauyn, can be found in the region, and quarries to mine the stone as a building material.

The Laacher is still considered very much an active volcano. There has been recent seismic activities and heavy thermal anomalies under the lake. Carbon dioxide (CO2) gas from magma still bubbles up at the southeastern shore and scientists believe that a new eruption can happen at any time, which today would be a disaster beyond all description. The region known as the Eifel is an idyllic low mountain range in West Germany bordering the Rhine to the East and the Moselle River to the South. Its highest elevation a mere 747m at the Hohe Acht. German geologists have been concerned that there may be a volcanic threat. This possibility is beginning to gather strong support in expert circles, particularly after four recent earthquakes and the realization that magma is filling into the chamber below. The situation could turn from quiet to catastrophic in a matter of months. The volcanoes of the Rhineland are not subjected to close surveillance, for they have not been active is a long time. That seems to be changing.

Magma is once again filling into the chamber beneath the lake. This again is something that would contribute to global cooling if it were to erupt. There have been four recent earthquakes: April 28, 2019; May 2, 2019; May 6, 2019; and May 7, 2019. When the Fukushima Japanese disaster took place back on March 11, 2011, Chancellor Angela Merkel, who was a chemical physicist by profession, took the decision to stop eight nuclear plants in Germany and initiated a gradual, full exit of Germany from nuclear energy by 2022.