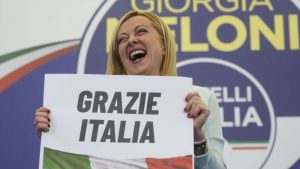 Italy’s new PM Giorgia Meloni revealed her first economic initiatives with a budget of 21 billion euros. The Italian government will no longer provide free handouts to those who simply refuse to work. This should not be controversial.

For starters, anyone eligible for welfare must actually reside in Italy. Those capable of working will have eight months to find employment before their free paycheck runs out. Alternatively, if someone refuses a job, they will be excluded from receiving welfare. The 5-Star’s citizens’ wage will be abolished by next year as the system has been abused by many who simply do not want to work. They are reviewing the pension system as well, but it’s too late to save the pension funds.

Italy’s first female PM is also encouraging couples to start families amid a birth rate crisis. Women may take a sixth month of maternity leave and still receive 80% of their salary. Meloni cut taxes on goods for newborns and feminine hygiene. Couples will receive a 50% increase in the “baby bonus,” and families with over three children will receive more incentives. Italy needs future taxpayers.

Everyone cheered when America appointed its first female vice president, but Kamala Harris has done nothing for women who still pay the pink tax and do not have access to maternity leave. It is astonishing how controversial this move has become with the papers calling Meloni a Fascist dictator for preventing working taxpayers from paying for those unemployed by choice.