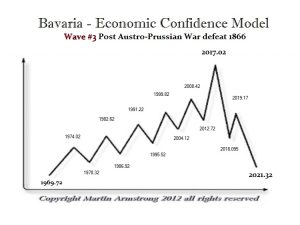 Following the recent State elections in Saxony, Brandenburg and Thuringia which reflected voter disillusionment and discontent with the CDU and SPD how do you view the German political scene to the 2021 Federal election?

REPLY: Bavaria came into existence in 1806 when Napoleon abolished the Holy Roman Empire. It was at this time that Bavaria’s land area was greatly expanded. Our cyclical model on Bavaria suggests that it will separate from northern Germany by 2030. This will be inspired by the austerity policies that have devastated the local economy. However, this will only be augmented by the difference in religion between Protestant v Catholic. That was also a factor in why Bavaria joined with Austria, which was also Catholic, in the Austro-Prussian War that resulted in Bavaria’s defeat in 1866. Bavaria had to cede several Lower Franconian districts to Prussia.

The Bavarian conservative party, the CSU, lost its absolute majority once the Economic Confidence Model turned in 2017 during the subsequent election in 2018. Meanwhile, the Greens emerged as the second-largest political force in southern Germany. Additionally, the Eurozone sovereign debt crisis is impacting the municipal level and the austerity policies imposed by the north continue to brew civil discontent. The loss of the CSU in Germany undermined the survivability of Merkel which instigated her demise.

The civil unrest will turn upward sharply when this current wave concludes 2021.32. The eventual separation of Germany will most likely unfold by 2030 at the earliest.