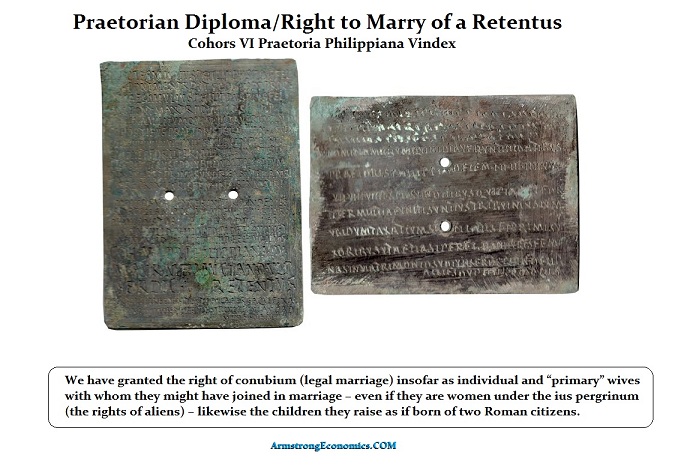 The world seems to be moving toward complete control over the freedom of movement. Most likely, we are approaching that critical point where governments are afraid of what is coming on the horizon. There are those in government who are well aware that socialism is collapsing and they indeed fear the rise of civil unrest. As a result, they are imposing restrictions on the freedom of movement. A passport is a travel document, usually issued by a country’s government, that certifies the identity and nationality of its holder primarily for the purpose of international travel. 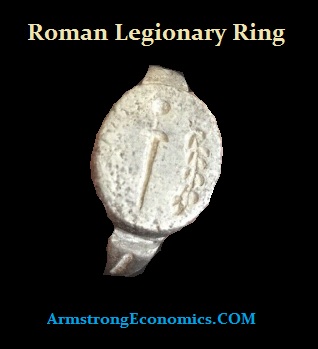 In ancient times, there still was a requirement to prove you were somehow legitimate. Here is a Praetorian document[1] granted by the emperor giving a soldier the right to marry an alien. She was to be treated as a citizen and any children would also be considered to be a Roman citizen. There was no formal need for a passport within the Roman Empire, however, you still needed to prove your legal status somehow. A messenger or individual traveling though territories would carry some form of the mark from his patron, whether it be a sealed letter or a piece of jewelry that confirmed who he was.

Today, we have class rings to prove you went to a particular school. Here is a Roman legionary ring to prove you were a soldier. You did need something to convey who you were to protect the traveler from harassment, for he was protected by a mark in a ring or document. That person was then under the protection of whoever’s seal or mark they bore. Roman society was built around the idea of a Client-Patron relationship. Therefore, this relationship conveyed that you were under some sort of protection and thus lacking that distinction that could otherwise allow you to be robbed or whatever.

You would place yourself under the protection of a certain individual or become indebted to one and then you would owe them some favors or errands later in life. This thus allowed for safe passage through the Empire. This same sort of system was in place internationally as well. If someone from the merchant class traveled abroad to trade, he would carry the mark of his patron with him. Likewise, a diplomat would carry a symbol of the emperor or a noble family to prove his status.

Indeed, perhaps one of the earliest known references to an international travel document/passport is found in the Hebrew Bible. Nehemiah 2:7–9, dated from approximately 450 BC. It there states that Nehemiah, an official serving King Artaxerxes I of Persia, asked permission to travel to Judea; the king granted leave and gave him a letter “to the governors beyond the river” requesting safe passage for him as he traveled through their lands.

The 1548 Imperial Diet of Augsburg required the public to hold imperial documents for travel at the risk of permanent exile. But this had adopted the policies that first emerged in England when King Henry V is credited with having invented the first modern passport, as a means of helping his subjects prove who they were in foreign lands. The earliest reference to these documents is found in a 1414 Act of Parliament.

In 1540, granting travel documents in England became standard and this became the job of the Privy Council. It was about this time that the term “passport” was used. You were considered the “subject” of your king and that really meant you were his “property.” If you left England to go to France where you committed some crime, the French king could not punish you and you had to be returned to your king (owner) with an account of what crime you committed, for only he could punish his property.

This tradition of being the property of a king led to the development of territorial jurisdiction with the American Revolution, for to deport someone to their king to be punished for a crime in America made no sense when they declared to be free of a monarchy. The American Revolution meant if you committed some crime in America, you were to be punished locally and not returned to a king they did not recognize.

In 1794, the British passports became the job of the Office of the Secretary of State as a result of the American Revolution and thus became a standard practice, whereas the Privy Council formally advised the sovereign on the exercise of the Royal Prerogative which would grant a document for travel at the prerogative of the king. 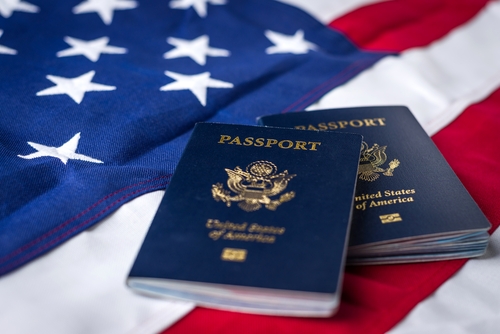 Some Europeans have taken offense to what I wrote that Americans will need a visa to visit Europe starting in 2021. They say this is not a visa, but just a “screening.” They fail to understand that this is not a visa in the sense of a stamp in your passport. Beginning in 2021, all foreign citizens will be required to undergo a pre-screening and registration process, which will be known as the European Travel Information and Authorization System (ETIAS) before entering European Schengen-zone[2] countries. Not all EU members are part of this Schengen agreement – notably Britain, Scotland, and Ireland.

Currently, if you want to travel to Rome for a vacation, you just hop on a plane and you do not need to apply for a visa in advance for up to 90 days. They grant you the visa there upon entry. That will all come to an end which is why we are holding what may be our LAST EUROPEAN WEC this year. Every American will require pre-screening, so in other words, you will need a quasi-visa to even get on the plane. There will be no more free travel.

The USA has the Electronic System for Travel Authorization (ESTA) which is also an automated system used to determine the eligibility of visitors to travel to the United States under the Visa Waiver Program (VWP) and whether such travel poses any law enforcement or security risk. This is not mandatory at this time and it does not eliminate a visa when that is required from certain countries.

This is what I call a quasi-visa, which is pre-screening. Europe will simply require all foreigners, including Americans and Canadians, to obtain a pre-screening to even board a plane in advance. The technical “visa” will still be stamped in your passport upon arrival.

So those trying to distinguish this from a visa are overlooking the fact you cannot get on a plane without the pre-screening approval, which means it is the same as if you had to apply for a visa to enter the country.

Each traveler will be required to apply for the right to visit Europe online. They will have to fill out forms with all personal biometric questions (name, date of birth, etc.), passport information, as well as questions about the applicant’s health, criminal record, and any previous European immigration history. They will be able to deny you access based upon health or even political philosophy or public statements in social media. Officially, here’s how the process works but they do not provide the hidden details. 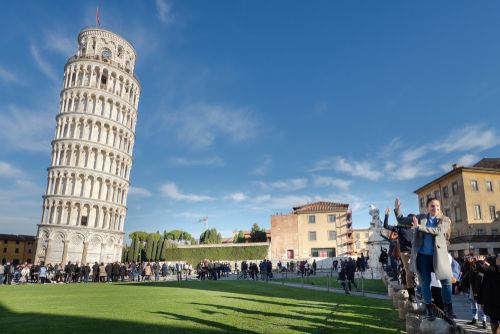 The application will be then checked across multiple databases right down to your credit history. If the application is not flagged to be looked over manually, they claim a decision will be reached by the system “within minutes,” the site says. If an application is denied, the applicant will receive a reason as to why but you can bet it will omit all political implications and focus on anything, such as arrest records, and will deny you a visa. The shocking number of Americans who are arrested is one-third of those BEFORE they reach the age of 25. That alone will eliminate one-third of Americans who will be denied a visa. Then they will move to your credit history, health, and so on. And people talk about Trump’s wall? They have no problem with refugees pouring into the country, but Americans looking to see the Leaning Tower of Pisa, sorry you have a bad credit history. 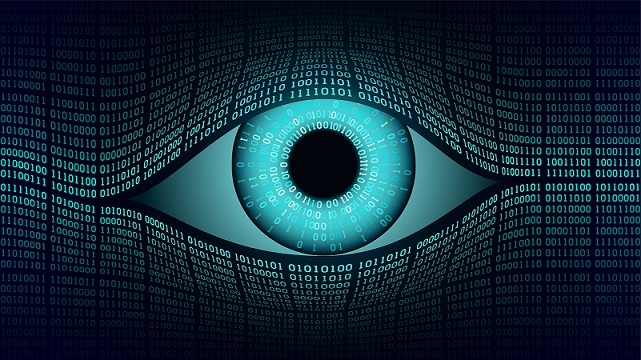 We are approaching the real Big Brother era. By 2020, China also plans to give all its 1.4 billion citizens a personal score based on how they behave. Some with low scores are already being punished if they want to travel. Nearly 11 million Chinese are not allowed to fly and 4 million are barred from trains. We are rapidly approaching the use of technology that will prevent you from traveling or doing anything if you are somehow not acceptable to governments.

Our children and grandchildren will NEVER know what freedom really was all about.

Welcome to the new age of technology. We will have to prove who we are to even move. In communism, you could not move to a different house without the permission of the government. If governments see their demise, they will do whatever it takes to retain power.

1) EXTERIOR OF THE TABLET:

TRANSLATION OF THE EXTERIOR OF THE TABLET:

INTERIOR OF THE TABLET:

TRANSLATION OF THE INTERIOR OF THE TABLET:

[2]You must apply to visit Schengen Area

« Travel Restriction coming in 2021 to Europe
Can European Sovereign Debt Really Crash Without a Free Market? »