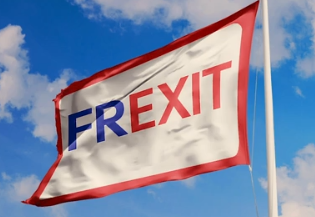 There is a rising minority that is starting to blame France’s prolonged economic decline on joining the euro. They are demanding that Macron take back control of their country. Creating the euro never produced the single interest rate as promised, nor did it transform Europe into the image of the United States. Their misunderstanding of the dollar and why it became the reserve currency right down to interest rates has plagued the euro and the entire European project since the Treaty of Rome.

They never told the people that the true idea behind the EU was that a one-European government would end all future wars. As I have said, the European Commission charged with setting up the euro attended the World Economic Conference in London. I explained that their sales pitch of a single currency resulting in a single interest rate, pointing to the dollar, was simply wrong.

To convince the people to join the euro, they were pointing to US federal bonds when each state paid a separate interest rate depending upon their own credit rating. Indeed, the volatility they pointed to in the currencies simply move to the bond markets. The false idea of a single interest rate led to southern states issuing more debt, thinking they were not on par with Germany.

All of the dreams of a single currency solving all the problems were just absurd. In my discussion back then, I warned that the only way to create a single interest rate was to consolidate the debts of all member states, and thereafter, each state would be on its own as in the United States. Germany insisted that to join, there would be no consolidation of debts. Kohl knew that the German people would never vote for joining the euro. Therefore, Kohl never allowed the people to vote on changing their entire country. He admitted that he would lose. Therefore, he insisted on no debt consolidation, fearing there would be a German uprising against such a measure.

This is why Merkel played hardball with Greece by refusing any debt forgiveness. When her image was tarnished globally, Merkel then opened the borders to let in Syrian refugees, some of who were not even from Syria, to save her image.

Then the excuse behind an open door policy to justify all the refugees pouring into Europe was that socialism was collapsing. The birthrate was declining and they realized that the entire economic system was constructed upon a Ponzi scheme. They came to the stark reality that if there was not a new crop of younger taxpayers, then the benefits would dry up, and there would be a revolution.

This has allowed Klaus Schwab to enter with fresh promises of taking socialism to a new level by destroying capitalism and taking control. He theorized seizing the Fourth Industrial Revolution, justified imposing digital passports, ending democracy, and creating a new welfare state to pay people to just stay home.

These policies are now boiling in France. They fear the influx of Muslims is changing France forever and will lead to civil war.