Did You Have Omicron Over Christmas? 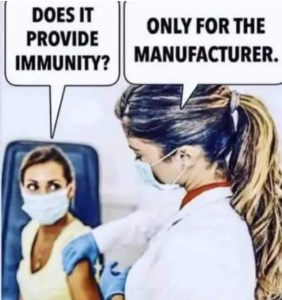 Comment: The wife and I came down with om-moron-icron over Christmas, kids were fine. The family acted like it was a death sentence as we are a no vaccine home. Brother who lives three states south thought we were irresponsible for not having the shot and lectured me all year. Low and behold he and his family also came down with omicron. Everyone was sick but it was like having a flu and EVERYONE WAS FINE. My brother had to catch covid to believe me after all.

Reply: I have heard countless stories similar to yours. We are in the midst of flu season as well, despite that being shrouded in secrecy as if this isn’t the time of year that people cyclically fall ill. I personally know numerous people and households who contracted the new variant over the holiday season. Yes, many were vaccinated like your brother. But, as you noted, they were completely fine after a week or so. I understand people have died of COVID, but people also die from the flu and other viral infections too.

Omicron seems to be more contagious but less severe than other strains, and that was not a factor that the powers that be considered. More and more people are directly contracting COVID, surviving, and realizing, “Hey, that wasn’t so bad!” Additionally, now they have antibodies that are far superior to the vaccine. If they didn’t before, people will now realize that shutting down the world was utterly unnecessary. “Why did I willingly stay home for months, pull my kids out of school, shut down my small business, ruin my finances, subject myself to an unknown vaccine?” The list of questions is bound to appear in anyone’s mind who is still capable of critical thinking. Once the cognitive dissonance passes, people will be enraged that they lost years of their life for no valid reason.