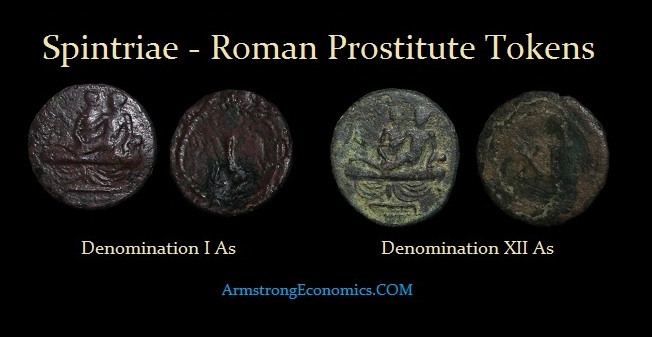 QUESTION: Mr. Armstrong; I read about the prostitute tokens of Rome after another one was found here in London. They say they are not sure why they exist. Some said it was to mock Tiberius. That does not seem plausible all the way up here in Britain. Can you elaborate on their origin? Was it really a crime to pay a prostitute with a coin that had the image of the emperor?

ANSWER: Yes, many of the people seem to just look at Tiberius (14-37AD) who the rumors said he was engaging in wild sex acts himself. But that too was rumor and speculation. It does not seem that these are some political mockery of Tiberius. There are far too many denominations and designs no less they have been found throughout the empire.

The more likely scenario is just looking at Augustus (27-BC-14AD) who was very conservative if not prudish. He banished Ovid who wrote his Metamorphoses to Romania for advocating free love and exiled his own Daughter who he basically disowned. He passed family laws that forbid young men to remain unmarried. It is far more likely that Augustus made it treason to pay for sex with a coin that had the image of the emperor when they all did. While these tokens have been attributed to Tiberius, I believe that is simply out of character and were by no mean political mockery, but because of the policies of Augustus.

I have written extensively about that topic before. The tokens are also known as spintriae. Yes, it was treason to pay a prostitute with a coin that had the image of the emperor and they all did – hence the tokens. From an economic perspective, these are rather important for they demonstrate that the government cannot outlaw anything with regard to human behavior even under the pretense that it is for their benefit.