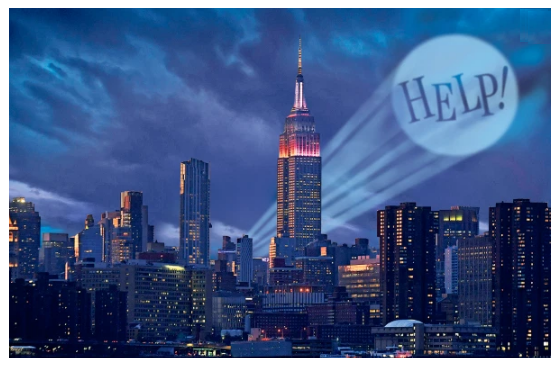 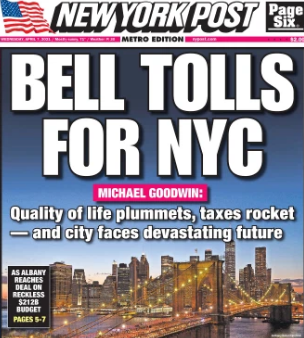 New York City is dying thanks to COVID. It has really killed Broadway. When I would often go to a play, the vast majority were tourists from overseas. I would often listen to the different languages being spoken around me. New York City is clearly dying as a mass exodus has taken place of not just the rich, but even Wall Street is moving quietly to Florida. The rise in taxation that is reducing the quality of life will only continue to send more people south, and the hallow remains will gradually decline into 2042. Even permits for guns have soared in New York as the police are unable to restore order. The East Village was the hardest hit with so many businesses just gone. NYC is rapidly becoming extinct. Politicians only see the world from their perspective. They fail completely to comprehend how the economy truly functions. Thus, NYC is on the edge.

This COVID plan-demic has so altered the social structure it is dividing the population into vaccinated v unvaccinated. Even among those who were vaccinated, they are not what you would call Biden supporters. Some have taken the vaccination just to be able to visit family in Europe. Others thought that it would mitigate COVID and prevent hospitalization. Yet, the destruction of jobs and suspending education for many cannot learn remotely. There is also a massive shift with millennials returning home to the nest.

The Democrats are hard at work and desperately trying to open the flood gates to grant citizenship to those from the Mexican border, giving them access to a welfare state, while keeping the border closed to Canadians, fearing they would vote Republican. Then they are also promising citizenship to what they call the “dreamers,” again trying to expand their voting base.

While many try to blame China for COVID and presume they did this deliberately while they are not locked down, any rational thinking person would quickly realize that such theories are attributing clairvoyance to the Chinese leaders. Never in 6,000 years of history has any nation ever carried out such a response. Even during Woodstock, the Hong Kong Flu had the same death rate as COVID, and nobody shut the entire world economy down.

It is very interesting how the 309.6-year cycle marked when NYC was on the brink of bankruptcy in 1975, which was spot on from when NYC was born in 1665. It is stunning how New York has followed the ECM model rather closely, which does not bode well for what is coming in 2022. The 2007-2009 Financial Crisis marked its epicenter in New York City. The collapse of Lehman Brothers and Bear Sterns accelerated an economic meltdown that became the Great Recession. Before it was over, the nation’s unemployment rate had reached 10%, but the loss of jobs in the financial sector of NYC approached 20%. Nearly 9 million payroll jobs had been lost, housing prices had plummeted, and the stock market had crashed.

Since New York City was the epicenter of the 2008 financial crisis, the federal government’s immediate response was too focused on propping up New York-based financial institutions. They feared that if the Investment Banks failed, then the government would no longer be able to sell its debt into the marketplace. The national economic downturn was officially dated from December 2007 to mid-2009 when Real Gross Domestic Product began to increase again, but non-farm payroll employment didn’t bottom out until the first quarter of 2010.

Thanks to COVID lockdowns, this financial crisis is politically made and has created a cycle inversion. Unlike the Great Financial Crisis of 2007-2009, this time, the source of the crisis is government, and the response is the opposite of what we saw during the 2007-2009 crisis. Where Lehman Brothers marked the collapse in the private sector from reckless financial products, this time it is the government’s incompetence. The result has been over 100,000 wealthy people migrating from NYC to Florida. Worse still, Wall Street itself is quietly leaving, relocating their most profitable positions and trading to Florida. The crisis facing NYC will escalate, and the financial crossing of the Rubicon will arrive in 2022.