The White House Changed the Definition of a Recession 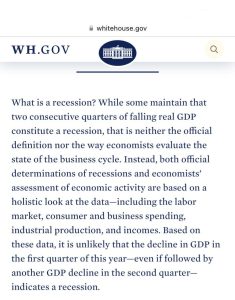 Governments have a way with words. Namely, they can change the definition of a word at the stroke of a pen. The definition of “vaccine” changed under the CDC’s guidance from “a product that stimulates a person’s immune system to produce immunity to a specific disease, protecting the person from that disease” to “a preparation that is used to stimulate the body’s immune response against diseases.” This permitted the COVID experimental injection to be called a “vaccine.”

According to some on the top US court, only a specialized biologist can define the term “woman.” “Mothers” has changed to “birthing people,” and words seem to have lost all meaning.

Now, the White House is changing its definition of “recession.” A recession was typically categorized as two consecutive quarters of GDP contraction, albeit not the best measure. Still, this was the tried and true formula for the government to determine the health of the overall economy. The White House now says that data from every facet of the US economy must be considered and foreshadows what to expect for Q2. The White House will not admit that the US is in a recession under Joe Biden. They will downplay the next GDP reading for Q2 and cite their newly formed definition for a “recession.”