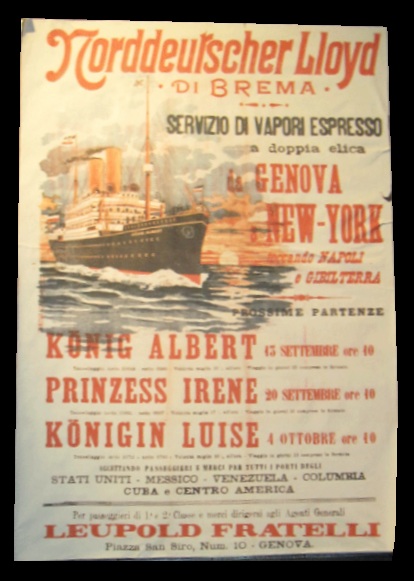 After reading your blog post about the 300% increase in the cost of healthcare for refugees, I wondered the cost in this country for illegal aliens. Healthcare. Education. Food stamps. Etc. I googled anywhere from 3.4 to 11 billion dollars from health care alone.

I laughed out loud after reading the above. You wrote about the turn on the last group of people off the boat.

Keep up the good work and see you in Nov

ANSWER: The cost of socialism is not merely over the top, it has altered the migration patterns within human society tremendously. The waves of migration from Europe to America were each inspired by the economic conditions at home. Therefore, we find the Irish, Germans, Italians, and English all coming during varied waves or periods overall when looking at the majority (naturally there were people from each group who moved for personal reasons). Nonetheless, the one thing that they all had in common was that they paid for their passage and they did not expect social benefits for free.

Today, the migration patterns are purely economic, but they are inspired by socialism whereby they need only show up and receive automatic income and benefits. When the European migration took place, predominantly during the 19th century and then waves after World War I and World War II, the people received no handouts from the taxpayer. There were no social programs to receive free living expenses. Churches provided food when people gave to charity BEFORE there were taxes. Europeans migrated to the United States to start new lives and to earn a living — not because they would be subsidized.

There are waves of migration that are caused by political unrest and no doubt some of that was at the reason for people fleeing Syria. Less known is the wave of refugees fleeing to Colombia from Venezuela who are also seeking security and economic stability since the army continues to support the Venezuelan socialist government that is collapsing. There were Americans in the south who fled to Brazil during the Civil War. They were called Confederados (Portuguese pronunciation: [kõfedeˈɾadus]) and were some 10,000 to 20,000 Confederate American refugees. They settled primarily in the state of São Paulo.

Providing welfare checks to show up on your soil alters the reasons for migration that have existed for thousands of years.

« Supply v Demand-Side Economic & What is Never Discussed
Do We Really Borrow From Only Ourselves? Does the Debt/GDP Ratio Means Anything? »