Where Can We Flee to This Time? 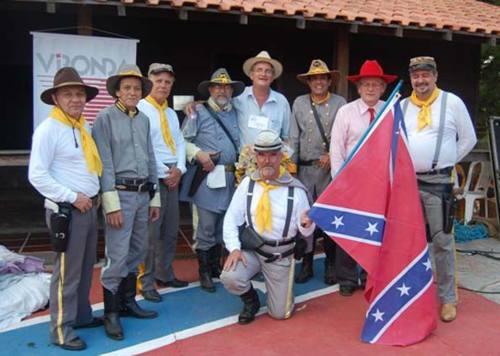 One question a lot of people ask – where can we go this time? America was the place people fled to from Europe and the economic abuses. This is why the American people were such isolationists for World War I and II distinct and apart from its politicians. The politicians did everything to get Americans to support a war. Roosevelt even went to Boston to promise their sons would never go to Europe, just arms. The Irish were not very tolerant of defending Britain when they saw the English as the oppressors of the Irish that sent them fleeing to the States.

Asia may present some problems for any kind of a mass exodus. That really leaves Africa and South America. One of the best kept secrets was the fact that many Southern Confederates fled the USA upon losing the war and they took off to Brazil. To this very day they still celebrate the American Confederacy in Brazil.

Confederate leaders had their eyes squarely on Brazil during the 19th century as was the case for Mexico. Confederate president Jefferson Davis made sure the Confederate constitution included the right to expand, and he filled his cabinet with men who thought similarly. Davis even hinted that the slave trade could be revived in “new acquisitions to be made south of the Rio Grande.”  Brazil was not just the land for fleeing Nazis, it was also the destination of American Confederates.

Prior to the outbreak of the Civil War, U.S. Naval Academy founder Matthew Maury dispatched two Navy officers to the Amazon basin, ostensibly to map the river for shipping. Instead, they were secretly plotting domination and collecting data about separatist movements in the region. When the South lost the war, Maury refused to abandon his plans. Instead, he helped 20,000 ex-rebels flee the South to Brazil, where they established the Confederate colonies of New Texas and Americana. To this day, hundreds of descendants of these Confederate refugees, known as Confederados, still gather outside Americana to celebrate their shared heritage of rocking chairs and sweet potato pie. In Brazil, the Old South still lives on in culture and tradition.

So perhaps the only place left will be south of the border. Where American’s called Mexican’s swimming across the Rio Grand “wet backs”, they may apply the same term to Americans fleeing the new draconian America if the direction we fall is authoritarian rather than freedom – cómo está.