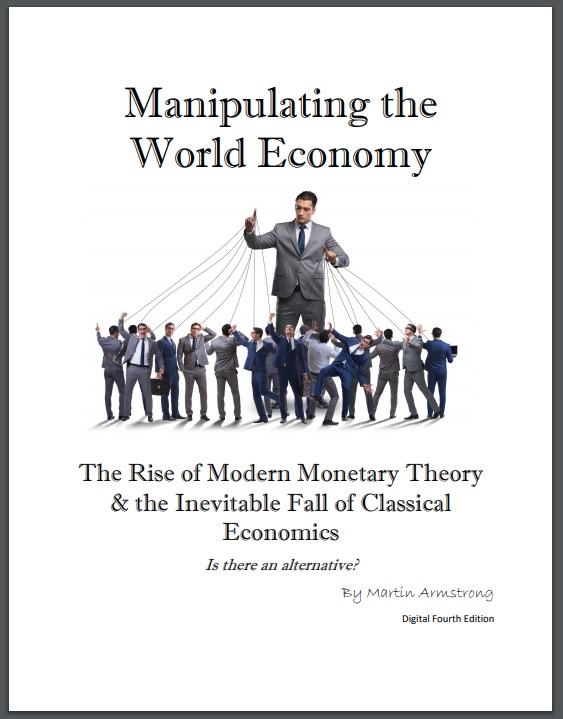 QUESTION:  Hi Martin, the dollar’s performance bucks logic, especially with Federal Reserve officials spending all week to deny any speculation of a tapering soon in relief measures or an imminent hike in interest rates standing at near zero.

But what made the whole thing even more bizarre was the dollar’s defiance of the rocketing U.S. deficit and debt forecast from the Biden’s administration’s fiscal plans to fight Covid-19.
Why is the dollar so strong? and why is Gold selling off? Are they being manipulated? When do you think we will see Gold go above 2k?

ANSWER: The CFTC data reflected the largest week-to-week turn against the dollar since early-Aug 2020 with the USD’s net short reaching its highest mark on record (in dollar terms) at USD35bn on the back of a USD3.7bn increase in favor of most of the currencies it would seem.

You must understand that we are dealing with a complete collapse in economic theories. This is why it may seem weird. That is why I released that book on Manipulating the World Economy. I am finishing a new chapter to add on COVID for the 5th edition. It keeps selling out in a matter of hours. There is a digital version available on our site.

What we are dealing with is the collapse in Keynesian Economics which held that an increase in the money supply would be inflationary which has proven to be false. The Goldbugs disagree with me but that is because they are so brainwashed but that rhetoric. The central banks have used that same theory and increased money supply hoping to create inflation without success. This is how Modern Monetary Theory has emerged saying after 6 years of QE and no inflation you can just print without impact. All of this ignored the bottom line. As long as people do NOT trust the future, they will hoard their money and not spend it even as the supply increases. You need to change that dynamic. They (1) suddenly believe that it will be more costly to wait to buy now, or (2) they lose confidence in the government and refuse to hold their money.

We are in a dangerous transition period and it will be confusing. You have to let go of your Keynesian indoctrination which centers around the Quantity of Money Theory that is what the central banks have continued to try to follow without any success. They do not understand the economy and the solutions are out of their control. They lie on the fiscal side and that has been totally corrupted by the World Economic Forum and Klaus Schwab.

« The Future & What is Really Going On
NY to Lose Financial Capital of US to Miami? »