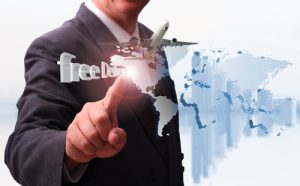 I agree with Trump. Assembling in the U S is not sufficient. We need the supply chain parts (eg manufacturing ) in the US. What do we do when we get in a war with say China – do we submit an order to china for parts to assemble a ship? Does not fly.

Kyle Bass and Bannon have come out speaking about the duty american companies have to our country. They use our legal system, tax system, to date favorable non tariffs and other incentives — where is the pay back to us? The days when our country was simply for sale and being sold out by politicians is gone – or we won’t have much of a country left. We have lost about half of our manufacturing jobs since nafta.

It needs to stop. Too bad if countries whine and cry that we can no longer be taken advantage of
We have been used and abused for a long time…people are sick of it.

thanks for the blog 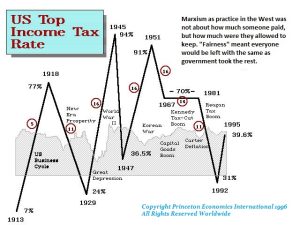 REPLY: It is true that parts are shipped and then the final assembly takes place in the USA. But we also have to ask why did manufacturing leave in the first place? I testified before the House Way & Means Committee on this topic back in 1996. They wanted to know why no American companies got contracts in China to do the Yellow River Dam, which went to the Germans. I explained that Americans are taxed on worldwide income whereas Europeans pay taxes on what is earned in their territory. Why should someone pay taxes on income generated outside the USA when they are not using any services in the United States? It turns out that we are economic slaves because whatever we produce anywhere belongs to the government. It is no different from the 19th century – we are still the property of the state.

What we must understand is that American companies began to set up offshore just to be competitive. It was not that labor was $5 an hour v $15. That is the popular image they create to target corporations. The real problem is our tax code looks like the brainwave of a schizophrenic. 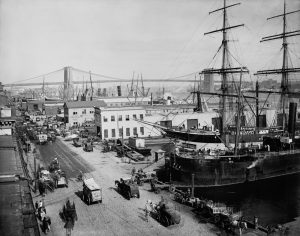 On top of that, we had a period of really hostile unions. Just look at New York City. Here is a photo of horse-drawn express wagons, moored ships, and piers at New York City’s South Street Seaport back in 1901. New York City was the largest port for trade. The unions became so corrupt and militant, they simply drove the port to other cities. There is nothing left in New York City anymore.

Then there was the fact that the militant unions took the position that they were exploited so the quality of their work declined. The Germans and Japanese offered quality and that was fair competition which eventually forced changes in the United States. Instead of workers, now much is done by robots. If we are really concerned about jobs, then address the elimination of income taxes which would make American workers more competitive. Restore the Constitution to indirect only.