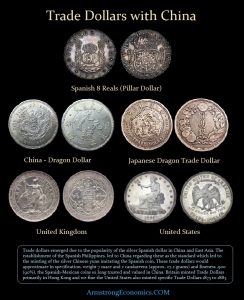 QUESTION: I only recently learned of your material and am still digesting it. I appreciate that you encourage critical thinking. I hope you find my questions of the same spirit.

In your recent article “Are Two-Tier Monetary Systems a Possible Tool?”, you illustrated how South Africa’s experience could provide an example for nations wanting to untangle their domestic currency from global obligations (i.e., US dollar, presumably others too).
Would you mind elaborating on this concept in relation to the following questions?

My questions:
1) For this 2-tier approach to work, must every nation have a 2-tier money system, or would it suffice to have only the major players do so (i.e., USA, EU, etc)?
2) If every nation had a 2-tier money system, then how would that compare and contrast to a “global SDR” or some other global, non-national currency acting the reserve currency?

I suppose what I am really asking is: Imagine a collection of nations and each nation has a 2-tier system. The nations agree to use each other’s “external” tier when dealing with each other and keep the “internal” tier for solely domestic purposes. Instead, now imagine that same collection of nations decided they would each use a global, non-national currency (SDR or otherwise) as the global reserve currency.

What similarities and differences would these 2 different approaches yield? Are there certain conditions where 1 approach would be desirable over the other approach?

I find this subject both intriguing and very relevant, so I would like to hear your insight.

Thank you for the new (to me) material.

ANSWER: During the 19th century, it was common to issue a “trade dollar” with China who used the silver standard initially by using the Spanish 8 reals known also as pillar dollars. The US issued trade silver dollars and domestic silver dollars of different weight. All of these nations were issuing a two-tier currency to facilitate trade with China.

During the 14th century, there was also a two-tier monetary system. Florence used the gold florin for trade, but domestically, wages and commerce took place in silver. Companies were required to keep two sets of books by regulation.

A two-tier system can be used to isolate foreign capital inflows. Switzerland was suffering and that eventually broke the peg. The foreign capital was not looking to buy assets in Switzerland, they were just converting euro to Swiss and parking the money. Therefore, a two-tier system would have allowed the flow of capital to concentrate in what we would call the Financial Swiss Franc (FSF). This peg would have not been necessary and they could have even imposed negative interest rates or zero rates to deposits in the FSF. Any trade for produces could have then been delegated to the Swiss franc and the peg would not have been necessary.

We would not need a system where everyone had a two-tier currency and traded against each other. The new International Unit of Account (IUA) would be a basket of currencies and your local currency would then trade against that. You would need to allow contracts and debts to be contracted in this IUA freely, as takes place today in US dollars. This would by no means eliminate FOREX risk.

Insofar as a global SDR, the problem would be the calculation and then the IMF has been notorious for corruption. Would some nations put pressure to alter the formula because of a financial crisis?

I would say that the formula must be fixed and based on the total percentage of international trade a given nation wields. It should be subject to revision only once every 5 or 10 years at fixed terms.

The primary reason I would design the system in this manner is that the Federal Reserve has already become the central bank of the world. The Fed has lost the ability to manage its own economy because the IMF and others lobby it not to raise rates because that would adversely impact their currencies. There should be an IUA so that a central bank can manage its own economy without impacting others because they will be prohibited from issuing debt (public or private) in a foreign currency — only in an IUA. There would be no sovereign debt issued by the agency controlling the formula. The reserves of central banks would then be only in IUA terms.

Already, capital flows globally when it sees opportunity, and in this manner, it acts as an arbitrage tool. If real estate looks cheap in one country, the capital will flow in. Australia, New Zealand, and particularly Vancouver are fighting this trend. There will be a natural cycle to it and there is no need for changing laws to try to stop it. The Japanese were big buyers during the 1980s, even buying Rockefeller Plaza in New York. As their economy turned down, they resold it and exited.

« Why Are Capital Controls Destructive?
The Ocean Shipping Reform Act »