Yuval Noah Harari, a self-described historian and one of Schwab’s loudest mouthpieces, believes that we will see the rise of the “useless class.” Harari noted how during the industrial revolution, people went from working on the farm to working in a car factory. He described it as transferring from one low-skilled job to another low-skilled job.

Since automation is leading the new world, future job prospects in 20 to 30 years are unknown. Harari believes it is impossible to know what to teach children today to make them productive citizens in the future. There will be “a new massive useless class that has no military or economic usefulness, and therefore no political power,” he stated. This is another push toward the World Economic Forum’s goal of government control – you need us but we don’t need you. 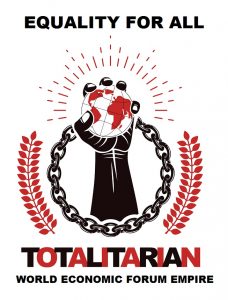 History tells us that farming is certainly not a low-skill profession. Look at what happened when Mao killed off all the farmers in China. A low-paying profession does not mean it is low-skilled. Our society could not function without farmers or automotive workers. Additionally, he does not take into account the beauty of creative destruction cited by Schumpeter. The brick and mortar retail stores may be gone in 20 years, but new positions will arise and people will develop skills and adapt to those roles. As for education, schools can begin by teaching children to think independently and question everything (not their gender). Claiming that there will be countless people out of work, “useless” to society, opens the door to government welfare programs becoming commonplace.

I cannot help but to be reminded of Hitler’s classified “useless eaters.” Like those at the WEF, Hitler believed there was a class of humans among society who simply consumed but did not contribute. Instead of hoping they’d rely on government aid, he simply murdered them. Be on high alert when a global agency begins referring to portions of the population as “useless.”

« Rebel News on the WEF Infiltration of Governments
Australia – One Giant Step for Klaus Schwab – You Will Own Nothing! »