I have reported how Schwab controls Europe and the entire international system of agencies set up among nations. He controls deep into the United Nations, and right into the World Health Organization. Schwab is a mythological control freak. He tries to control 100% over the agenda. Inside the WEF, he has a zero error policy. 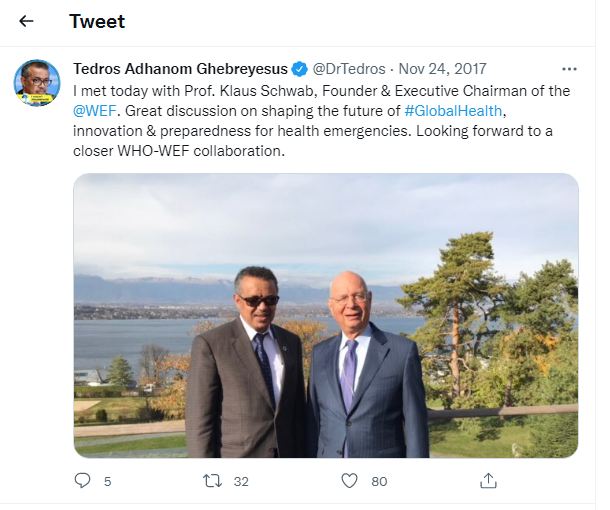 Meanwhile, Tedros Adhanom Ghebreyesus is the head of the World Health Organization. Tedros is the first person in the 72-year history of the WHO who is NOT even a medical doctor, just like Bill Gates. It was Schwab who supported him for that post, just as he recommended Legarde for the IMF and then for the European Central Bank. He has also put in the head of the IMF from his board of the WEF as well. Schwab also has the WHO in his back pocket. To put someone who is not a medical doctor at the head of the World Health Organization would be like putting Jeffrey Epstein as the head of a monastery. There have been long-standing concerns about Tedros as well as calls for his resignation which go unanswered.

Tedros is now trying to gear up the fear factor again saying there is now another mutant they call “mu” which nullifies all the Gates vaccines. Schwab also works hand-in-hand with Bill Gates.