The US is Being Invaded Right Now & the Media is Cheering 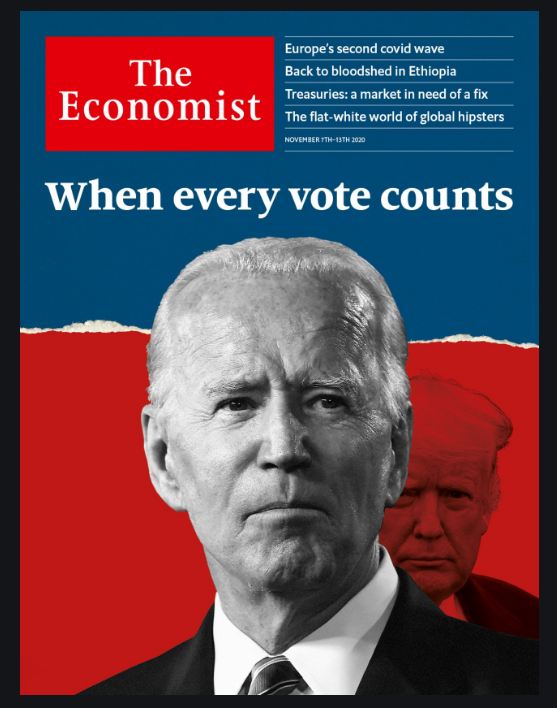 We even have the British Press trying to overthrow Trump. The Economist has the audacity to pronounce Biden the winner claiming, “When every vote counts,” but fail to add the words “When every legal vote counts.” Everyone knows that the civic duty of the dead is to continue to vote even for parties they never would have voted for when alive. No outlet or campaign should rush to calling the 2020 race until every LEGALLY cast vote is counted. Attempting to propel Biden to be president demonstrates that these organizations are no longer trustworthy and certainly will only fuel civil war.

The mainstream media and Big Tech want to immediately declare a winner because they have conspired from the beginning to overthrow Trump to usher in this Great Reset, which was conceived in Europe and is being used to invade the United States no differently than a foreign army. It was the ECB that moved to negative interest rates in 2014 and destroyed its bond market. Europe has no other way out but to take the Great Reset and adopt Communism 3.0. But like all leftist organizations, they cannot tolerate anyone else in the world who disagrees.

The mainstream media and Big Tech have done everything they possibly could to undermine Trump and his entire administration. What has been at stake is they are really communists at heart at the top, and they have instructed their journalists that they are NOT ALLOWED to pursue stories about fraud. I really hope Trump wins, for then the mainstream media would be brought to court and investigated for treason against the people of the United States in an attempt to support a foreign invasion to take over the United States and to hand the nuclear power to the United Nations. Just listen to the 8 predictions of Klaus Schwab. The United States will no longer be a superpower and that will be “shared” by other nations.

The United States is in a state of war where we are being invaded. That is being supported by the mainstream media as they were used in the Russian Revolution.