US Deterrent Against War was Our Economy – Not Nukes! 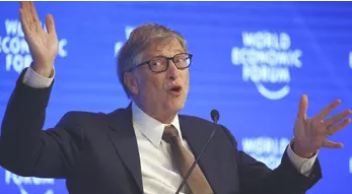 The most important threat that Bill Gates has done is he has invited war. He has so weakened the economy of the West that he has placed the West in the very same position as the Roman Empire. Once it was weakened from within, that is the calling card for others to attack. The power of the United States was not our nuclear missiles. The fact that the United States had the largest consumer economy in the world that the rise of Europe from the ashes of World War II, Japan, and China, were all dependent upon the American consumer. Destroying that base means that these other nations no longer can be sustained by selling to Americans. If Americans catch a cold, the rest of the world gets pneumonia.

It is a basic military strategy that the next war will be fought with a multitude of means. That is not limited to strictly military. While World War I was fought with chemical weapons, the next will be fought with biological weapons which will fall under the non-military category. They will be deployed to strike during times of conflict. With people like Bill Gates and his single-minded objective of reducing population,  he has created that internal conflict and destroyed the American consumer market which was our greatest deterrent to war.

As other economics now implode unable to sell to Americans because he has advocated shutting down America and has his lap-dog Fauci impose it, he has set in motion the greatest threat to world war. Germany, for example, is a mercantilist economy dependent upon selling manufacture to everyone else. Germans rank among the poorest in Europe. Italians have a greater net worth. As all of the external economics move into major declines and their people suffer, the plot thickens to blame this on Americans and tensions will rise.

Additional non-military strategies, of course, hacking into websites, targeting financial institutions, terrorism, using the media, and instigating class-warfare internally. But encouraging the west to move to digital currencies, then you both hack the system and target the power grids. This will undermine the economic ability to even fight. That is what the Germans were doing to Britain. Counterfeiting British pound notes and dropping them from planes with the hope of undermining the economy.

Bill Gates is a threat to World Peace. He has been using the World Economic Forum to infiltrate world leaders.

« Iran & War
The Future & the Destruction of Capital Formation »