Kim Jung-un in North Korea is refusing to blink yet he maybe. He has turned domestically first in the ongoing crisis and has now announced a massive army recruitment program. An article in a Pyongyang-based propaganda newspaper today declared already more than 3.5 million people had signed up to fight. The newspaper is claiming that millions were “volunteers” including students and former soldiers.

The truth is that the North Korean army is subjected to absolute obedience to the Kim dynasty. If civilians are scrambling to volunteer, it is also likely that they are malnourished and desperate civilians. Yet this peals back the fact that Kim is blinking. 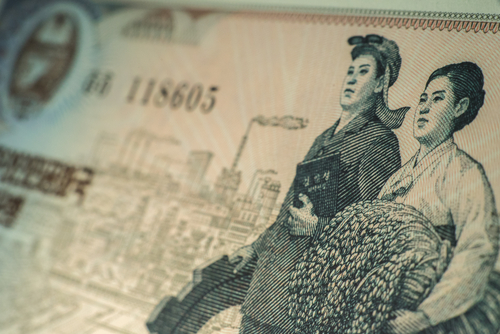 His latest claim that 3.47 million people had asked to enlist in the army since the North Korean crisis began, is shifting his power achievement away from missiles and to people. Even their currency reflect the old communist subservient duty to the state. The man holds his Marxist bible and the woman is gathering wheat in the fields. This may have the impact of worsening the economy if true for feeding that many more soldiers is impossible for his regime without reducing rations for the current army soldier.

The real crisis brewing is that Kim has indeed raised the stakes, but once you achieve that goal of a nuclear power, what next to demonstrate he is strong and in control? Kim is pounding his chest because CNN and Democrats like Ellison have taken his side against Trump. He is showing this to people to demonstrate Trump does not have the support of his people as does Kim. This only emboldens him and makes him feel powerful. There nobody in the industrialized world over 25 who does not know at least his face by now.

Now trying to raise his army strength, is a diversion for his people. The USA would never launch an invasion. Therefore, he is shifting his power impression from nukes, he cannot win, to boots on the ground. This is trying to pretend he is backed and loved by the people – highly unlikely.

He cannot win a war of nukes and so he seems to be turning to sheer manpower, or should I say humanpower since 50% of his army is women. An army that is not truly loyal will not really fight and once the first shots are fired, they tend to fall apart historically.