1.) Demoralization – This typically occurs in the span of 15-20 years as it takes time to re-educate the youth to believe in values contrary to tradition.

2.) Destabilization – Once a generation has been demoralized, it takes another 2-5 years to destabilize a nation’s economy, foreign relations, and defense system. Hunt out the sympathizers and introduce the welfare state to make the people reliant on the government.

3.) Crisis – This stage only takes six months as the results are rapid. Create a crisis, introduce war, fear, and terror. Cause the people to look toward the government for comfort amid desperation. 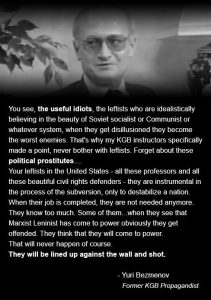