We are approaching the 50 year anniversary of the TUNNEL to Freedom which was dug by West Berliners to reach the East to rescue families from the horror of Marxism. Today, once again, we have governments restricting travel by claiming it is due to COVID. To protect the people, they must strip their freedom of movement once more. In Australia, you cannot travel from one province to another. In France, they have imposed roadblocks which are to prevent people from gathering for protests. Macron has also imposed 6 months in prison for failure to have a COVID Passport. In Spain, you cannot even travel between Barcelona and Madrid without permission from the government. Once again governments are restricting the freedom of movement not to protect the people, but to protect their own power.

This new documentary entitled “The Tunnel” is coming at a critical junction in time when we face the growing threat of totalitarianism under the pretense of a pandemic, which is nowhere near the crisis of even the Influenza of 1918. Socialism is collapsing. Governments can no longer borrow thanks to negative interest rates and as such, they are unable to fund pensions and social programs. They know it will not take long for the people to rise up and drag the politicians to justice. So they are using COVID as the pretense to end human rights and the freedom to assemble or move. The mainstream media is simply marching to the orders from above and just like the media behind the Berlin Wall, they will never report the truth anymore. 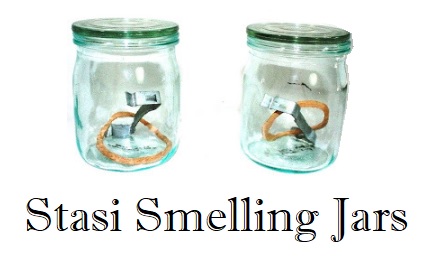 The East German Secret Police, the Stasi, collected used underwear and placed them in smelling jars in case someone did not show up for work. When the Berlin Wall fell, a shocked world discovered an unbelievable program at the Stasi headquarters. They could then unleash the dogs to hunt a person down as long as they had their sent. Today, the government is accused once again of creating a “scent profiling” of G8 activists to let the dogs once again find them.

Today, the very same policy developed by the East German police to keep track of people has been adopted by the governments of our free society. They can track us by cell phone and by credit card usage. The FBI found Ghislaine Maxwell by using her mobile phone data. They can now use facial recognition to pick you out of a crowd. The methods may change, but the policies remain the same.

This movie “The TUNNEL” is more than a slice of history. It is a glimpse of the threat we always face from the left-wing within all governments who insist that they must control everyone for their own good. I highly recommend this film and you should let your children see the real face of tyranny. that is once again rising to retain absolute power.