Then the notorious corrupt Liberal MP had the open audacity to claim this is misinformation when it is openly published even at Harvard University, one must wonder what are his connections and how much has he received in gifts, political donations, and favored status from bankers to block any such questions.

These people have betrayed their own country. Schwab’s agenda to eliminate even paper currency was to take place by 2024. But COVID is backfiring which has resulted in bringing this forward to 2023 just after the US elections.

This is the image of Canada emerging from the outside. Even Archbishop Carlo Maria Viganò has come out in support of the Truckers. 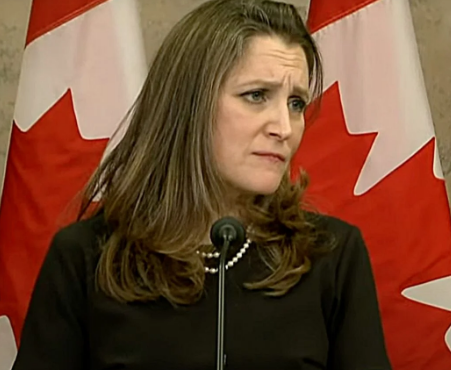 Schwab was not kidding and it was not the misinformation. The Emergency Act will become permanent in Canada. Deputy Prime Minister Chrystia Freeland intends to make permanent the invasive financial surveillance system introduced as part of the “Emergencies Act” to absolutely destroy and crush the civil liberties protests and to be able to defund all opposition. Freeland is also a Young Global Leader graduate who is also loyal to Schwab. They have been indoctrinated with an authoritarian view of powers and Canada is to have its sovereignty surrendered to Schwab’s global vision. She declared:

“As of today, all crowdfunding platforms, and the payment service providers they use, must register with FINTRAC and must report large and suspicious transactions to FINTRAC (Financial Transactions and Reports Analysis Centre of Canada).” Freeland added: “This will help mitigate the risk that these platforms receive illicit funds; increase the quality and quantity of intelligence received by FINTRAC; and make more information available to support investigations by law enforcement into these illegal blockades.”

Trudeau has called in the police and they are to attack the protesters with brutal force. Leaks of communications have shown that the RCMP currently in Ottawa is to assist in the crackdown on peaceful protesters allegedly brag about using brutal force in a leaked group chat according to Rebel News. He has also called in police from Quebec who will defend him against the English-speaking truckers. This was Schwab’s and Canada’s Tiananmen Square. Canada may now have only until the 1st week of April.

This is a battle to the death for Schwab’s Great Reset. Canada MUST be driven into submission and this is critical to the ideas of Schwab and his vision for the world.

Schwab has promised these politicians dictatorial powers with the end of all democratic processes. Schwab is pushing the design of Europe upon the rest of the world whereby the head of state NEVER stands for election, neither does the European Commission which makes all laws and to fool the people that they are still relevant, they get to vote for an MP who has no power to make or overrule laws crafted by the Commission. This is the system they intend to impose on the world and politicians will NEVER again need to worry about being voted out of office. This is why governments are now protecting Schwab. He has promised them a world void of any power of the people to vote them out of control. What Schwab has not considered is that he is boxing in people to the point the only solution will be a revolution.