Politicians – Courts – The Corruption of the Rule of Law in 1760s 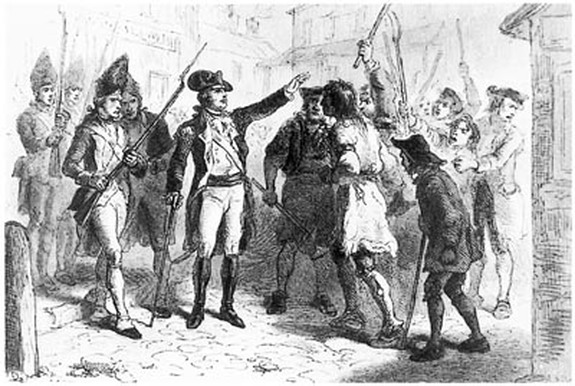 William Tryon (1729-1788) was the Governor of North Carolina from 1765 to 1771 and the Province of New York from 1771 to 1780.  He is best known in North Carolina for his suppression of the Regulator Movement, which some see as a precursor of the American Revolution.  The Regulators were rebelling against increased taxes by Tryon as well as corrupt activities by tax collectors in the Piedmont and western part of the colony.

The War of Regulation sprung from a dramatic population increase in North and South Carolina during the 1760s, caused by a migration from the larger eastern cities to the rural west pressured by an economic decline. The rural section of the colonies were predominantly an agricultural economy. As merchants and lawyers began to move west, this began to alter the agricultural economy. This internal migration within the colonies was augmented by a new Scots-Irish migration to America who also sought to move into the rural region.

I have warned that allowing migration during a period of economic decline as has been taking place in Europe, is a highly dangerous mix. Here during the 1760s, the rural agricultural community was suffering from a deep economic depression caused by severe droughts throughout the previous decade. The farmers lost not merely their livelihood, but also their own direct food source. As income was cut off due to the crop failures, the farmers fell into debt. The merchants turned to the lawyers using the court to settle disputes. The debt defaults and the influx of lawyers increased the legal prosecutions more than 15 times. Where there had been just seven debt cases annually, this jumped to 111 in Orange County, North Carolina, alone.

Many court cases were being used to seize property. Farmers lost their homes and property to the lawyers and merchants and this fueled the animosity toward the migrants. The lawyers used the law to create an unjust advantage. The politicians were involved and this created the image of what people saw as a ‘courthouse ring’, with corrupt officials benefiting from the foreclosures.

The resentment built continuously and finally the framers rebelled and took up arms. This armed conflict erupted at the Battle of Alamance in 1771, where Tryon’s soldiers slaughtered the farmers.  Tryon even executed the leader and some were pardoned. Then, Governor Tryon raised taxes once again to pay for the conflict.

This resentment remained in the minds of the people. This is often considered to be a precursor to the American Revolution. Such lessons are important to understand. It is not history, it is a road map as to how human nature responds. Just change the names and the dates and what has taken place before unfolds once again.

« Dan Rather Exposes Corrupt Media – But Back in 2008
Obama’s Administration Spied on Trump PERIOD? »