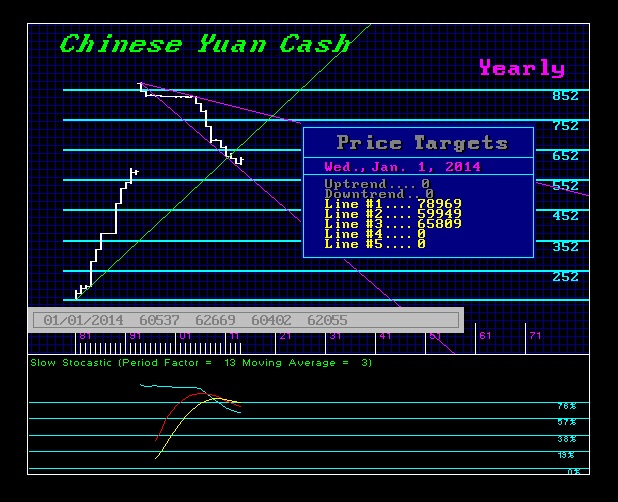 The dollar rally and the devaluation of the yuan is not a fluke and it most certainly is not a one-time event. The dollar declined against the yuan for 19 years during the same timing that saw gold decline from 1980 to 1999. The major low on an annual closing basis at 2013 and 2014 was an outside reversal to the upside for the dollar. The Yearly Bullish Reversal stands at 683 and technical resistance stands at 658. The dollar filled the gap that existed prior to 1994 and is yet another confirmation that the dollar rally is underway.

Yes, the world trade is contracting and will get much worse after October. Governments are destroying the world economy on their hunt for taxation. Politicians are hunting money as if it were some sport and are undoing everything that was built postwar. Numerous reports are coming in to us about people traveling on trains and having their bags searched for money in Europe. The hunt for cash is wiping out the world economy. Americans are being thrown out of banks and mutual funds everywhere. FATCA has forced Americans to repatriate dollars. The only real Americans who can operate overseas are now established multinational companies. Small companies cannot expand from the United States nor can individuals send money anywhere.

Add to FATCA the problem in Europe and we see capital still pouring into the USA from both China and Europe. The real estate cycle has/or will peak with this turning point around the world from Switzerland, Britain, Canada, to Asia right down into India and Australia. We are plagued by politicians who have absolutely no clue how to run an economy and it is now all about them retaining power virtually everywhere we look.

The dollar rally is unfolding despite the fact people do not understand why. They look only at the USA debt and assume the dollar must crash, when in fact, the problem we face is on a global scale and $18 trillion in U.S. debt is simply not the large enough for international capital to hide. The future is going to be anything but a textbook move. This is why this year’s World Economic Conference is going to be a real eye opener.