The US government says it ran a $US587 billion budget deficit for the fiscal year, which was a 34% increase over last year. Deficits have simply become a standard way of life for Western governments as a whole. They see no problem with borrow more each year when they have absolutely no intention of ever paying anything off. Deficits have become an intractable part of government while nobody bothers to address it. This is just a mid-slinging contest of he said she said.

Of course I get rabid emails from Hillary supporters who have just lost their mind. Nothing of what she has done would ever cause them to blow the cobwebs from that portion of the brain that is suppose to handle logic and reason. Nobody addresses anything of substance or explain how Hillary, the poster child of the establishment, would actually make any financial difference other than raise taxes. As long a anyone who seems to have more than they do are punished for their success, then all is good to them and to hell with the future. Of course, Trump says he would renegotiate the national debt as any big borrower would do. Other than that, we are in a runaway train and we will run out of tracks pretty soon.

The latest figures of the budget deficit show that the government is actually borrowing 15 cents of every dollar it spends. So as government spending increases by almost 5% reaching $US3.9 trillion in fiscal 2016, revenues have remained flat at $US3.3 trillion. The further taxes are raised, the greater the decline in disposable income, and hence it produces deflation even as the quantity of money rises. 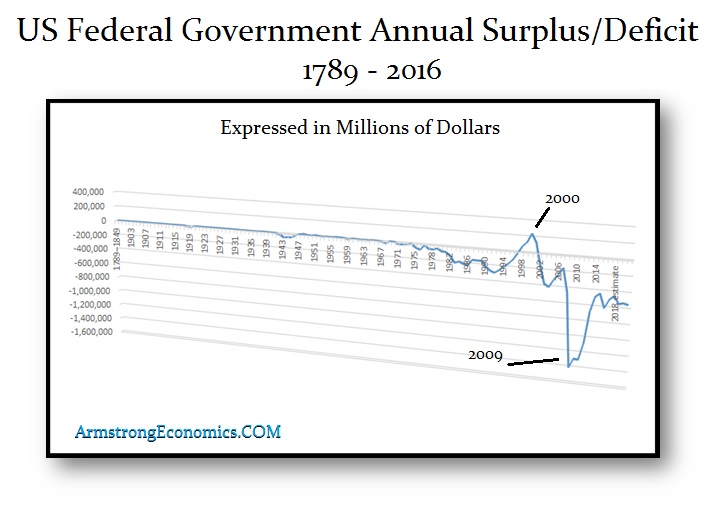 We can see that the Budget itself did a slingshot move first running up into an all-time high in 2000, and then it swung sharply down for 8.6 years bottoming in 2009. However, the Budget has been unable to move back to a surplus and as such it is now poised to to head sharply lower once again. The crash and burn is beginning.