Illinois Should Just Be Dissolved as the Solution 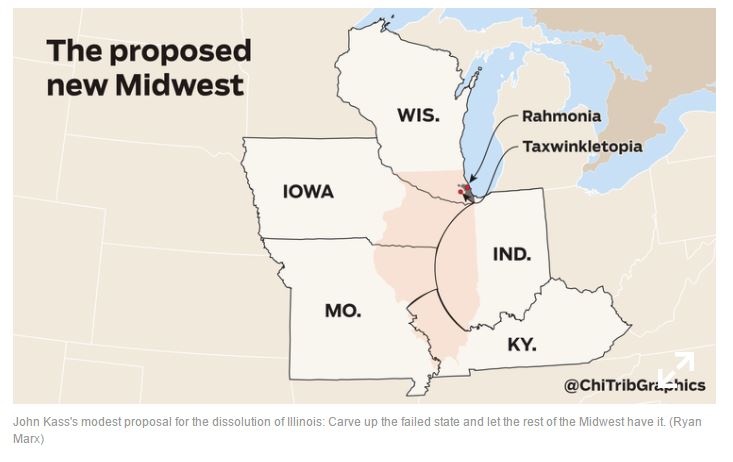 John Kass of the Chicago Tribune has come out with a blunt article, yet it is the only possible solution since the government is effectively just bankrupt with no hope of recovery. He writes:

“Illinois is like Venezuela now, a fiscally broken state that has lost its will to live, although for the moment, we still have enough toilet paper.

But before we run out of the essentials, let’s finally admit that after decade upon decade of taxing and spending and borrowing, Illinois has finally run out of other people’s money.”

To comprehend what is happening, all we need do is understand that socialism has really been about government helping themselves to other people’s money for their personal benefit. Their constitution says that government pensions come before everything else. That is helping the poor in paying their debts. The greed of the employees of Illinois has pushed the state to beyond the point of no return. The constitution can only be amended to deny future employees pension. It cannot be altered to deal with the quarter-trillion owed to state employee pension funds. There really is no way out and it because questionable if Illinois can even simply go bankrupt when it is constitutionally owed. So Kass’ solution may sound insane, but it is probably the only way to deal with the crisis – tear-up the state as a state and dissolve it entirely. Krass wrote:

Dissolve Illinois. Decommission the state, tear up the charter, whatever the legal mumbo-jumbo, just end the whole dang thing.

We just disappear. With no pain. That’s right. You heard me.

The best thing to do is to break Illinois into pieces right now. Just wipe us off the map. Cut us out of America’s heartland and let neighboring states carve us up and take the best chunks for themselves.

The group that will scream the loudest is the state’s political class, who did this to us, and the big bond creditors, who are whispering talk of bankruptcy and asset forfeiture to save their own skins.

This is the reality we face going forward. I have stressed before to get out of all government debt in the state and local level and buy NO MORE!!!!! The party is over!