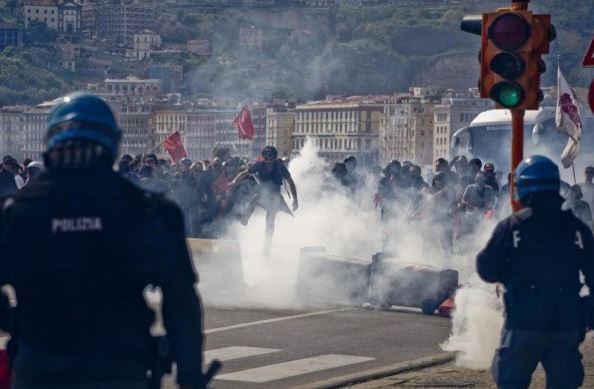 In Naples, Italy, riots against Prime Minister Matteo Renzi resulted in clashes between police and demonstrators.

Italy’s government had to address the plight of Italian banks which now seems to be significant as both houses of parliament voted to create a state fund for bad loans. On Tuesday, the government announced that they planned to fund the money houses to buy the bad loans. The decree also provides for the formation of a holding company to merge the 371 small credit unions. Therefore, it is placing the bad loans outside the banking system.

The Senate rushed together late on Wednesday afternoon. In the House of Lords, the vote was 171 for the plans, 105 against. Resistance to Renzi’s idea was very limited. Nonetheless, the House of Representatives had already passed the decree while Prime Minister Matteo Renzi had only a very thin majority in the Senate. The crisis appears to have forced the measure through, demonstrating how bad the banks in Italy really are.

The EU rules for bail-ins are breaking down. Each country is beginning to ignore Brussels by proceeding in their own manner and the ECB is really losing control. The new plan envisages that banks can bundle their bad loans into new financial products and then sell them. But who will buy them?

In reality, Italy’s government has survived a vote of confidence in this decree involving a bank rescue. This is now all about state guarantees for banks that could collapse under the weight of bad loans. That day is coming rapidly as all the QE efforts of the ECB will do nothing to reverse the crisis in banking or the economy.

Meanwhile, ECB Chief Economist Peter Praet spoke at a conference in Frankfurt on Thursday. Effectively, the message was that the ECB is ready and willing to do “whatever is needed” to return inflation to target. Instead of looking at the current negative interest rate policy, they continue to see the solution to be more of the same. Obviously, the ECB is incapable of reversing the trend as banks continue to implode in Europe and smart capital flees to the USA. The cycle will play out and things will look very bleak for Europe into 2018.

« Fed Admits it is the World’s Central Bank – not just the USA Central Bank
Has the USA Ever Paid off its Debt? »