Easter and its Origin

HAPPY EASTER TO ALL 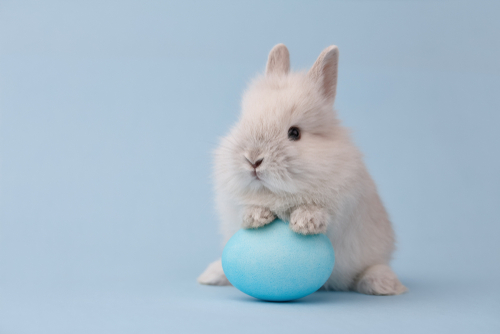 While Easter is the celebration of the Resurrection of Christ in Christianity, there are those who claim that Easter bunnies and eggs are Pagan rituals. The tradition of the Easter bunny bringing eggs is an interesting mystery. No one knows for sure how these things became a part of Easter observances. The most we can say is that the word “Easter” is probably related to the word “east” (ost in German) and that the Saxons had a month they called Eosturmononath. The legend of the Easter bunny bringing eggs appears to have been brought to the United States by settlers from Germany, as was the case with Santa Claus.

The German tradition of the Easter bunny (or Oschter Haws) appears to have migrated to America in the 1700s from Germany with the immigrants. Since then, the Easter bunny has become the most commercially recognized symbol of Easter in the United States. In legend, the Easter bunny brings baskets filled with colored eggs, candy, and sometimes toys for children on the night before Easter. This is the same tradition as Santa Claus bringing gifts on Christmas Eve. The Easter bunny will typically hide them somewhere in the house or garden for the children to find. Hence, the Easter egg hunt. 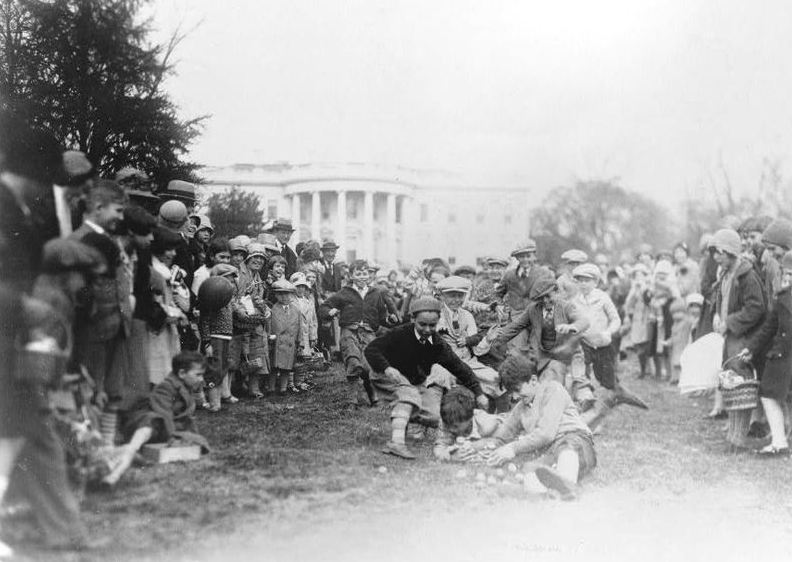 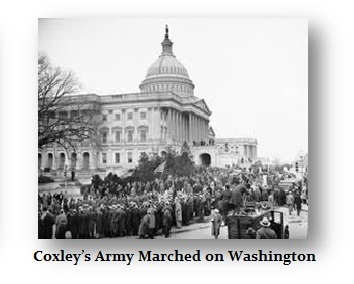 Believe it or not, the White House Easter egg roll began as a protest against Congress. By 1876, there was a four-year-old tradition on Easter Monday of an egg roll at the U.S. Capitol. The Easter Monday activity for the area schoolchildren began and schools would close on that Monday. These informal annual festivities, however, offended Rep. William Holman (1822 – 1897; Chairman of the Democrats). Holman pushed through legislation “to prevent any portion of the Capitol grounds and terraces from being used as play-grounds or otherwise, so far as may be necessary to protect the public property, turf and grass from destruction and injury.” Holman apparently did not like children. He viewed that they would ramble at will on the fresh green grass of the Capitol and he was out to put an end to it. As a result, he rammed through Congress the Turf Protection Law, which was signed by President Ulysses S. Grant in 1876. This Turf Protection Law was indeed ruthless, and it would be used to eventually break up Coxley’s Army protest of 1893 by arresting Coxley for walking in the grass.

The Turf Protection Act was a direct measure to ban children on Easter from using the grass as “play-grounds or otherwise.” President Ulysses S. Grant subsequently signed the bill into law. Up to then, schools in the Washington area would close the day after Easter, so that children could indeed “ramble” on the grass on the Capitol grounds while their parents picnicked nearby. The children rolled colored eggs down an embankment. This would often result in taring up the sod. The U.S. Capitol Police would issue tickets or warnings that they would enforce the new law.

President Rutherford B. Hayes, however, viewed the law as absurd. After one boy called out to him: “Say! Say! Are you going to let us roll eggs in your yard?” Hayes ignored Congress and invited children to the White House lawn for an Easter egg roll on April 22, 1878. Ironically, Easter egg rolls began as a protest against Congress by children. Where Congress actually said “get off our lawn” in the Turk Protection Act, it took children to defy them. In 1885, Easter egg rollers went into the East Room in the White House, looking to meet President Grover Cleveland. When he came down from his office to greet them, he was moved by the children and an indoor egg roll reception became customary from thereon out.

So Easter has emerged as an interesting event, which in many ways was a protest against the status quo from the Resurrection of Christ to the Easter egg roll on the White House lawn. It is not some Pagan ritual despite some claiming that Christian parents should not allow their children to participate in traditional activities that refer to the Easter bunny. There are no real roots to some Pagan ritual, and the last time I checked, I don’t recall that bunnies lay eggs.

There is a tradition of painting hard-boiled eggs during springtime, which does predate Christianity. However, the egg was not a Pagan symbol, but a cultural symbol around the world that symbolizes new life, fertility, and rebirth. The only thing we can surmise is that it was simply, at best, a symbol that winter was over and spring was here with a new birth for everything that perhaps aligned with the spring equinox. There is no direct evidence that the egg was anything more than a symbol of the rebirth of the cycle once again.