Washington Post Praying for a Recession to Defeat Trump

It has become obvious that the mainstream press is FAKE NEWS. They are indeed out to get Trump and are using their position to desperately try to support the bureaucracy. The Washington Post has run a story stating Trump is wrong about the strength of the US economy. They claim his own advisors are warning that a recession is coming but he keeps saying the economy is strong. They’re accusing him of being a liar, which is no surprise. 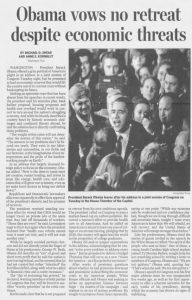 Back in 2009, the Washington Post always talked optimistically about the economy and how Obama would save the day. Now we have the Post talking up a recession in the USA into the 2020 election when NEVER IN HISTORY has any major newspaper preached the economy will crumble just to influence a presidential election. This is really amazing and a complete turning around for the media demonstrating they no longer report the news, they are trying to create it. Even the photos they showed of Epstein with Trump and his ex-wife were always used rather than those of Epstein with Bill or Hillary.

Every time there is a crash, the president ALWAYS comes out and says the economy is fundamentally sound. Hoover did that in 1929 and they have done that every time ever since — both parties. The theory is if the president ever came out and said we are doomed, the people would panic even more. It is just NEVER done until now when the press calls for a recession to defeat a president.