Now We Have Fake Journalists As Well 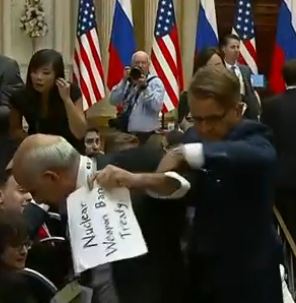 COMMENT: This character who pretended to be a journalist was only an op-ed contributor. It is amazing how so many journalists are using this against Trump. They truly are distorting this event and are fake news.

REPLY: Yes it is really a sad day. I have written OP-ED pieces for the Wall Street Journal. That does NOT make me a journalist for the Wall Street Journal. You would think the press would be upset with someone getting access pretending to be a journalist. This will probably lead to more security that the press will have to submit to. Just totally stunning that so many in the media do not report the truth. Everything has to be slanted. So now we have fake news and fake journalists. That matches the fake politicians who pretend to actually care about the people more than their own pockets and perks.

Some have used the opportunity writing: “Putin … has cracked down on the media in Russia. A number of journalists who have written pieces critical of the Kremlin have been jailed, attacked or killed in the country.” They seem to just want to pretend they are the good guys and have a right to influence people to push their own political agenda. Using this incident with a guy pretending to be a journalist to support themselves is pathetic. Just report the facts without the political bias – that’s the job of a journalist. Ever since the FCC repealed the Fairness Doctrine, we have biased news on both sides which has become so bad it is indeed fake and that becomes propaganda. Trump should direct the FCC to restore the Fairness Doctrine and force the media to be unbiased and always present both sides.